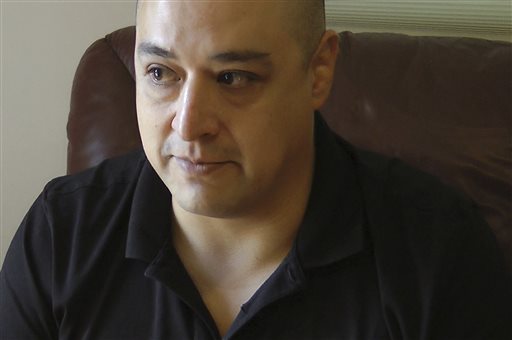 In this Wednesday, Oct. 9, 2013 photo, Rafael Sanchez discusses the impact the government shutdown has had on his family, during an interview at his home in Londonderry, N.H. Sanchez has been waiting two years to make his case for a green card since he and his family from Bogota, Colombia, have been living illegally in the U.S. since 1997. Their recent court hearing that had been scheduled in Boston was canceled because of the shutdown. (AP Photo/Holly Ramer)

HELENA, Mont. (AP) — The government shutdown is slowing the wheels of justice in federal courts by delaying civil cases, forcing prosecutors to operate with skeleton staffs and raising uncertainty about the system’s immediate future if the stalemate continues past Thursday.

That’s when federal courts officials expect the reserve funds they have been using since the Oct. 1 start of the shutdown will run out.

Criminal cases, which are required by law to go to a speedy trial, are still moving ahead, as are most bankruptcy cases and appeals. Civil cases and those in immigration court, however, are feeling the greatest impact from the shutdown.

“The Constitution tells us what we have to do and we can’t control our workload. It walks in the door, whether we’re funded or not funded,” said U.S. District Court Chief Judge Loretta Preska in New York, who has put all civil cases except those already in trial on hold at the request of the U.S. Attorney there.

She said the nearly 450 district court employees that serve the New York metro area will report to work to keep criminal cases on track even if funds run out. Officials at courts based in San Francisco, Philadelphia and St. Louis, Mo., also say their employees will work.

Prosecutors, staff and experts from other federal agencies such as the Fish and Wildlife Service and the Drug Enforcement Agency needed to help try civil cases have been furloughed. U.S. attorneys requested judges to temporarily set aside some cases, while a few districts have requested a blanket halt to all civil cases.

In Montana, U.S. Attorney Mike Cotter has requested stays in more than a dozen civil cases, with more to come.

Just over half of Cotter’s staff has been furloughed, and while those who have been sent home are eligible for unemployment benefits, some of those who are working without a paycheck are considering borrowing money or dipping into retirement savings to make ends meet, he said.

“We all have bills, car payments, mortgages and medical payments to make,” Cotter said.

Immigration court proceedings are largely shut down, too.

Rafael Sanchez has been waiting two years to make his case for a green card after he and his family from Bogota, Colombia, overstayed their U.S. tourist visa in 1997. Their New Hampshire court hearing scheduled for Wednesday (Oct. 9) was canceled because of the shutdown.

Sanchez’s daughter Karina, a high school senior, is not sure how she will be able to go to college. Without a green card, she won’t qualify for financial aid.

Her father said that after coming from a country with so much corruption and violence, he doesn’t understand why the leaders of this country of plenty can’t work together. “At what point do the politicians think about how many lives are dependent on them?” he said.

Decisions on whether to delay civil cases vary district by district, and often, case by case.

— In New York, Preska issued an order stopping all civil cases, except civil forfeiture cases. An exception is the government’s suit against Bank of America Corp. over high-risk mortgages sold before the financial crisis by Countrywide Financial, which the bank acquired in 2008.

— In Washington, the Justice Department was recently denied a request prompted by the shutdown to push back a November trial in its antitrust lawsuit aimed at blocking the merger of American Airlines and US Airways.

Attorneys for Geneva College say a delay is unfair unless the government also delays the reforms from taking effect Jan. 1.

If the shutdown goes on into the second half of October, juror reimbursement funds could run out — which would force courts to issue IOUs to jurors for their service. Courts may have to grapple with security issues: the U.S. Marshal service has been working without pay, but it’s unclear how long that can continue, said Charlie Hall, a spokesman for the Administrative Office of the U.S. Courts.

Federal public defenders also are feeling the crunch, deferring an increasing number of cases to private attorneys — a practice that had already been in the rise due to cuts from the automatic budget cuts earlier this year.

But the fund to pay those attorneys ran out in September and the shutdown has made the situation worse, Hall said.

The courts’ problems aren’t bad news for everybody. In Montana, the environmental group Alliance for the Wild Rockies has seen three lawsuits delayed, including two challenging logging projects in national forests.

That suits alliance executive director Mike Garrity just fine. After all, if the courts can’t operate, those forests won’t be touched.

“Logging isn’t occurring, so that is a good thing,” he said.