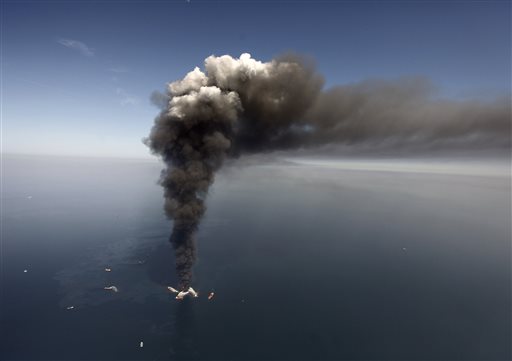 In this Wednesday, April 21, 2010 file photo, oil can be seen in the Gulf of Mexico, more than 50 miles southeast of Venice on Louisiana’s tip, as a large plume of smoke rises from fires on BP’s Deepwater Horizon offshore oil rig. (AP Photo/Gerald Herbert, File)

(The Washington Post) – The Justice Department announced Thursday an $18.7 billion agreement with BP to settle civil claims arising from the 2010 Deepwater Horizon disaster in the Gulf of Mexico, the worst oil spill in U.S. history.

The comprehensive agreement, the largest environmental settlement ever, includes the largest Clean Water Act fine in history as well as addressing other federal and state claims.

BP will pay the settlement at a rate of about $1 billion a year for 18 years, with the first payment due in two years. The London-based oil giant said it planned to add $10 billion to the enormous $43.8 billion it had already set aside to cover costs related to the spill.

Bob Dudley, BP’s chief executive, issued a statement calling the deal “a realistic outcome which provides clarity and certainty for all parties.” He said it would provide “a significant income stream over many years for further restoration of natural resources and for losses related to the spill.”

After Trade Deal, Obama Seeks to Repair Rift with Labor