Joint Venture Would Bring Rentals and Hospitality with Amenities
Advertisement 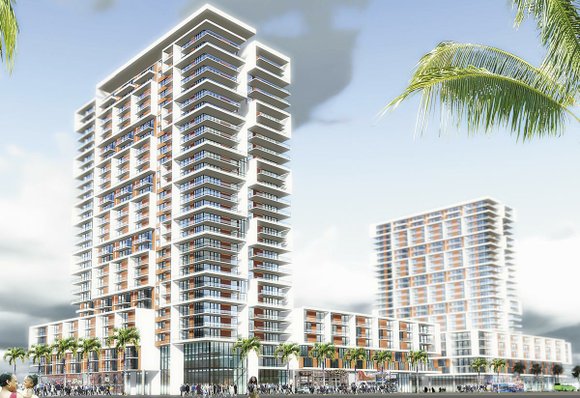 Joint Venture Would Bring Rentals and Hospitality with Amenities

by Ashley Montgomery
Special to the NNPA from The Miami Times

Great things are brewing in the historically-black Overtown neighborhood and it may well equate to more jobs and greater amenities for those who live in the community. South Florida-based developers Donahue Peebles and Barron Channer recently won a bid to build a jazz and blues-inspired multi-use district on vacant land located south of The Lyric Theater. According to the two developers, the project will cost around $250M to complete.

According to a memorandum received from City of Miami City Planner Gregory D. Gay, three companies had hoped to win the bid for the Southeast Overtown/Park West Community Redevelopment Agency [SEOPWCRA] but a special selection panel chose the Gateway Project over two other competitors — All Aboard Florida and Stone Soup Development, Inc. [Sawyer’s Landing] — who came in second and third, respectively. Selection panel members included Gay, Patricia Braynon, director of the Housing Finance Authority, Miami-Dade County and Brian Zeltsman, director of architecture and construction, Overtown CRA.

“We look at Overtown and see more opportunity and that’s what we are committed to,” he said. “Our team is totally comprised of Blacks and this project will create a modern downtown in the heart of Overtown. In turn, this will create jobs and a benefit for local residents.”

But while the selection committee has made its recommendation, CRA Executive Director Clarence Woods, III says he has questions about the proposals submitted by both Overtown Gateway Project and the runner up, All Aboard Florida, Inc.

“Overtown Gateway Project put together a better concept but after reviewing both I saw strengths and weaknesses in each of the proposals,” he said. “So I had to do may due diligence. In this case, I’m under a time constraint that doesn’t give me a lot of room for error. Concepts are important but there are other factors that may weigh more heavily — the ability to finance and the ability to complete the construction on time are just two.”

Woods adds that he has two chances to put out an RFP — if that doesn’t happen, the CRA will lose the land.

“We only have until Sept. 14 to get a proposal to Miami-Dade County so we don’t have a lot of time to make this deal happen,” he said. “We chose to speak to the selection committee’s top two choices so that if we cannot come to an agreement with the Overtown Gateway Project, we at least have another option to consider and in the end, hopefully, a negotiated development agreement.”

Channer said his company was disappointed and felt that they weren’t being treated fairly. But Woods pointed out that the decision to consider multiple proposals at once has occurred before.

According to Cornelius Shiver, chief of staff for City Commissioner Michelle Spence-Jones, the CRA will host a public presentation to talk about both proposals on Wednesday, Sept. 4th at the Camillus House [1603 NW 7th Ave.]

“The community will have the opportunity to go over both ideas and weigh in on which they prefer the most and believe is most fitting for the community,” Shiver said. “She [Spence-Jones] wanted to know how the residents of Overtown felt before making her decision.”

The City commission will formally consider the selection panel’s recommendation and any comments gleaned from the community on Thursday, Sept. 12 at their next scheduled commission meeting.

Bust to Boom: Can Strippers Save Atlantic City?