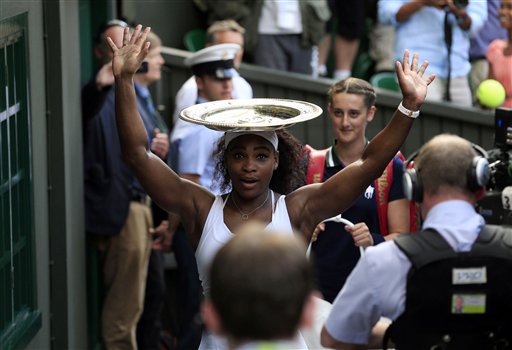 Serena Williams of the United States balances the trophy on her head after winning the women’s singles final against Garbine Muguruza of Spain, at the All England Lawn Tennis Championships in Wimbledon, London, Saturday July 11, 2015. (Jonathan Brady/PA via AP)

Back in the day, this pas de deux was standard practice for the Wimbledon winners. But it had long fallen out of favor until Djokovic decided to get the ball rolling again and invited Williams to join him.

“I was thinking more of a waltz or something I would say more sophisticated,” Djokovic said Monday morning at the All England Club. “But Serena wanted to move a bit more, so then we considered other options.”

The choice was the 1970s disco hit “Night Fever” by the Bee Gees, and though the champions did not move for long or with particular conviction, it was hard not to think about how close they came to being completely in step this season.