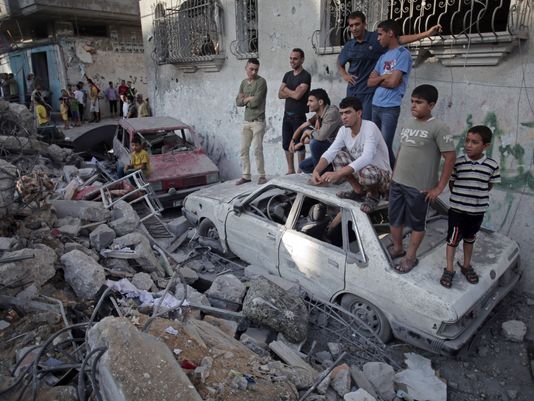 Palestinians look at a destroyed house where five members of the Ghannam family were killed in an Israeli missile strike early Friday morning in the Rafah refugee camp in the southern Gaza Strip. (Khalil Hamra/AP)

(USA Today) GAZA CITY — As the Palestinian death toll rose, Israeli Prime Minister Benjamin Netanyahu vowed Friday to continue to target members of Hamas with air strikes in Gaza until rockets the militant group has been firing into Israel from the southern border halt.

“I will end it when our goals are realized. And the overriding goal is to restore the peace and quiet,” Netanyahu said at a news conference.

At least 100 Palestinians have been killed in the past four days, the Palestinian Health Ministry said Friday.