Is Religion Good for Children?
Advertisement 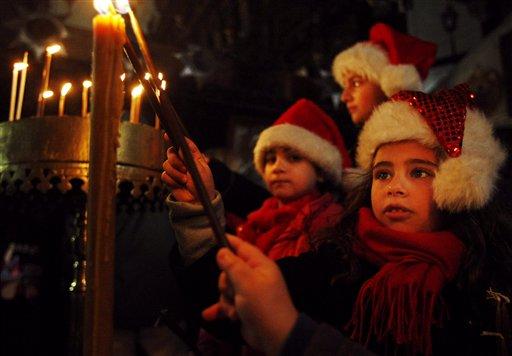 Palestinian Christian children wear festive hats as they light candles inside the Church of Nativity, believed by many to be the birthplace of Jesus Christ, during Christmas celebrations in the West Bank town of Bethlehem, Wednesday, Dec. 24, 2008. Tourists from all over the world flocked to Jesus’ traditional birthplace on Wednesday to celebrate Christmas Eve. (AP Photo/Tara Todras-Whitehill)

(Slate) – In the United States, conventional wisdom holds that you should raise your child to be religious. Taking the kids to church is the default; leaving them home requires justification. Push parents to explain why they should pass on their religion—apart from a principled urge to keep the faith—and they’re likely to tell you studies prove that kids do better with religion than without it.

But is religion really good for kids? That might depend on what kind of child you want to raise.

Several studies do seem to corroborate the conventional wisdom that kids raised with religion—any religion—are psychologically healthier than kids raised without it. The gap here is small but real: Some researchers link religious affiliation and regular church attendance with a mild boost in children’s mental health. That data is reported by parents, though, which presents an obvious problem: Religious parents might simply be more inclined than secular parents to view their kids through rose-colored stained glass. But teachers have also reported that kids who attend religious services have stronger self-control and react better to discipline.

One reason why children in religious families might be better behaved is that they think there’s more at stake. According to the so-called sanctification theory, religion imbues familial relationships with sacred significance, and religious institutions attach moral meaning to certain behaviors. Religious parents might see childrearing as sacred work and strive to raise kids with self-control and manners. Religious kids might also see good behavior as a moral imperative and strive to maintain discipline, not just for their own sake, but to please their parents—and God.

Religion Remains a Strong Marker of Political Identity in U.S.

Church a Haven for Muslims in Gaza