Is Randy Moss the Greatest Receiver Ever? Just Ask Him
Advertisement 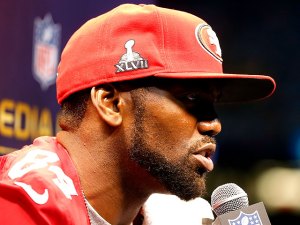 Probably not, but he’s close. And he’s definitely the only one brave enough to sit in a 49ers jersey at Super Bowl media day and proclaim that he is.

“I really do think I’m the greatest receiver to ever play this game,” he said Tuesday during media day.

Somewhere, Jerry Rice had to be wondering if Moss realizes he’s more likely to rank No. 2 all-time on his own current TEAM.

Oher, Subject of ‘The Blind Side,’ Tries to Keep the Focus on Football