Is Justice Near for N.O. Teachers Wrongly Fired After Katrina?
Advertisement 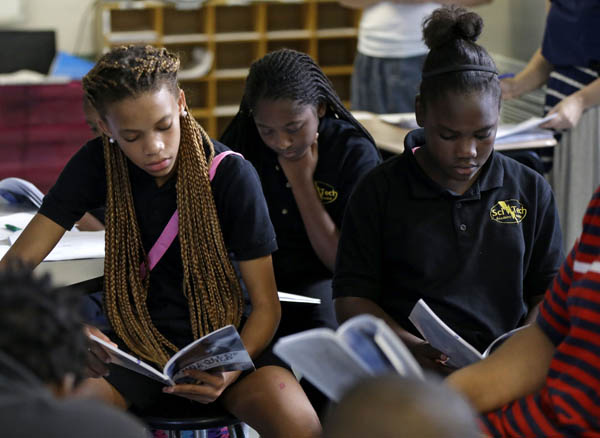 by Sue Sturgis
Special to the NNPA from The Louisiana Weekly

(Special from Facing South) — When Hurricane Katrina struck the Gulf Coast on Aug. 29, 2005, the Orleans Parish School Board and the Louisiana Department of Education saw the disaster as an opportunity to carry out a long-sought goal of dramatically restructuring New Orleans’ public schools. They fired some 7,500 teachers and other school employees—most of them African-American—and delivered a devastating blow to the United Teachers of New Orleans (UTNO), once Louisiana’s largest labor union and its first racially integrated teachers’ union.

But the teachers fought back in court—and they are winning. Next week, oral arguments in their class-action lawsuit over the firings will take place before the Louisiana Supreme Court. The suit claims the school board failed to follow proper procedure in terminating the employees and failed to grant them priority in hiring afterwards.

The lawsuit’s move to the state’s highest court comes following a unanimous January decision by a five-judge panel of the Louisiana Fourth Circuit Court of Appeal that held the employees were wrongfully terminated—or, in the court’s words, “deprived of their constitutionally protected property right to be recalled to employment without due process of law.” That decision largely affirmed a 2012 district court ruling that the school board and state of Louisiana violated the employees’ rights.

“This case has been a difficult and extremely stressful experience for 7,000 employees and their families who suffered after Hurricane Katrina,” Willie M. Zanders Sr., lead counsel for the plaintiffs, said in a statement issued following the appeals court ruling. “We pause to pay respect to all former employees who did not live to see this important victory, like Class Repre­sent­ative Gwendolyn Rid­gley who passed in October 2012. Other Class Represent­atives and thousands of employees continue to suffer physically, emotionally, and financially. I am thankful for the patience and prayers of former School Board employees and their families, and encourage them to STAY STRONG!”

An attorney for the Orleans Parish School Board has estimated that the District Court’s damages could amount to $1.5 billion and the appeals damages half that much, The Times-Picayune reported earlier this summer.

Before Hurricane Katrina, most of New Orleans’ public schools were controlled by the local Orleans Parish School Board. But in the months following the disaster, the state-run Recovery School District (RSD) — created by the Louisiana legislature in 2003 to take over and improve the state’s underperforming public schools—seized control of almost all of the city’s schools as well as the local board’s operating budget. But the RSD refused to allow even tenured public school employees to transfer to the state-run schools, which is the basis for the lawsuit’s claim that they had been denied a property right—a job—guaranteed them under the state constitution and various state laws.

At the same time, there was a legislative push supported by the Obama administration to do away with traditional public schools and move to charter schools, which are publicly funded but independently operated. As of this school year, none of New Orleans’ almost 90 schools are traditional public institutions, as the RSD has become the first district in the nation made up completely of charters—a transformation some have called a “grand experiment in urban education for the nation.” The teachers hired to staff these charters tended to be younger, whiter, and from elsewhere. Many hires came through the Teach for America program, which places recent college graduates in low-income schools and has been criticized even by insiders for its pro-corporate, union-busting agenda.

Supporters tout charter schools for providing greater flexibility with less bureaucracy. However, charters in New Orleans have been the targets of lawsuits for failing to adequately serve students with disabilities. Charter schools have also drawn criticism from teachers unhappy with having to work as at-will employees with few if any job protections and with disparities in pay and little say in how schools are run. Teachers are less likely to enjoy union protections at charter schools, with only 12 percent of charters unionized as of 2011.

But teachers’ unions are working to change that in places including New Orleans. In June, Benjamin Franklin High School — a prestigious magnet school named a top high school by U.S. News and Work Report—became the second charter in New Orleans where a teachers’ union has won formal recognition. The other is Morris Jeff Community School, where the teachers unionized last year. The teachers at Benjamin Franklin are represented by UTNO, while those at Morris Jeff formed the Morris Jeff Association of Educators, which gets support from the Louisiana Association of Educators. Last year, UTNO requested teachers’ contact information, employee handbooks, and charter agreements from about half of the city’s charter schools for organizing purposes, The Lens reported.

In the meantime, New Orleans’ former unionized teachers and other school employees await justice. The Louisiana Supreme Court heard arguments in their case on Thursday, September 4.

Sue Sturgis is an investigative reporter and editor for Facing South, the online magazine of the Institute for Southern Studies, where this article originally appeared, http://www.southernstudies.org.

Ferguson Protestors: ‘We Will Get Answers’

‘Pardons of Innocence’ Film to Debut at CBC Friday in D.C.