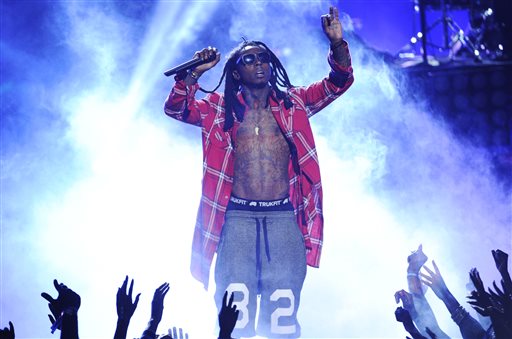 In this June 29, 2014 file photo, Lil’ Wayne performs at the BET Awards at the Nokia Theatre in Los Angeles. (Photo by Chris Pizzello/Invision/AP, File)

MARIETTA, Ga. (AP) — A man charged with shooting into Lil Wayne’s tour buses on a Georgia highway called cellphones linked to rappers Young Thug and Birdman before and after the gunfire, according to an indictment in the case.

A grand jury indicted Jimmy Carlton Winfrey on 30 counts including charges of aggravated assault and racketeering. The June 25 indictment says the gunshots following Lil Wayne’s Atlanta performance on April 26 stemmed from feuding regarding the rapper’s contract with Cash Money Records, the Atlanta label co-founded by Birdman, whose real name is Bryan Williams.

Lil Wayne and 11 others were traveling on the two buses struck by gunfire on Interstate 285 in Cobb County north of Atlanta, but nobody was injured. The indictment says Winfrey called “cellphones connected to Jeffrey Williams” — also known as Young Thug — before the shooting occurred and then afterward called a cellphone “owned by Bryan Williams.” Jeffrey and Bryan Williams were not charged in relation to the bus shootings.

The attack on Lil Wayne’s tour buses came a few months after he filed a federal lawsuit in New York claiming Cash Money Records owed him $8 million. The suit, which sought $51 million, was soon dropped by the rapper. Lil Wayne, whose real name is Dwayne Michael Carter, had been mentored by Birdman since starting his career as a teenager.

When Lil Wayne performed at an Atlanta nightclub in April, the indictment says, Atlanta police saw Winfrey pull up outside the venue in a white Chevrolet Camaro. Officers noticed that Winfrey “had an assault rifle in his vehicle,” according to the document. It says police, “fearing gang violence,” escorted Lil Wayne from the club and patrol cars stayed with his buses until they left the Atlanta city limits.

Jeffrey Williams was arrested Wednesday and charged with making terroristic threats in an unrelated case in neighboring DeKalb County. Police say he threatened to shoot a mall security guard in the face after being told the leave the building.

Jeffrey Williams’ attorney, Brian Steel, declined to comment Thursday on his arrest in DeKalb County as well as the allegations in the bus shooting indictment.

Why The ‘Empire’ Emmy Snub Matters