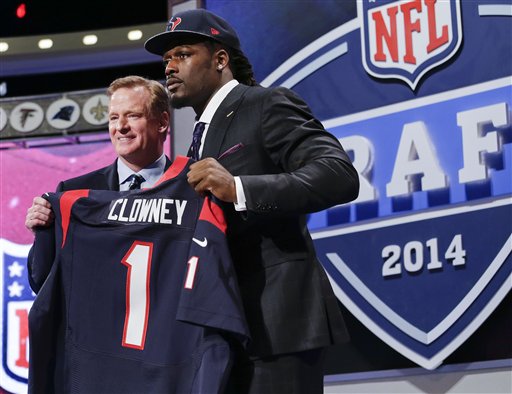 South Carolina defensive end Jadeveon Clowney holds up the jersey for the Houston Texans first pick of the first round of the 2014 NFL Draft with NFL commissioner Roger Goddell, Thursday, May 8, 2014, in New York. (AP Photo/Craig Ruttle)

(The Washington Post) – With the Supreme Court poised to rule on a case that could shape the future of television, the justices are navigating everything from copyright law to cloud computing. And then there’s football.

National Football League games have become some of the most popular programming on television; last fall, 34 of the 35 most-watched TV shows were NFL games. But the league tightly controls its games, collecting hefty fees from broadcasters, cable and satellite companies. If you’re a football fan who wants to watch games live-streamed to your device, good luck finding a way without paying for cable or satellite.

Now, the court is reviewing a challenge by broadcasters who say an upstart tech firm, Aereo, is getting their content without paying when it uses tiny antennas to lift live television broadcasts from the airwaves of local stations. Aereo then streams these broadcasts to its subscribers, charging much less than cable companies.

If Aereo prevails in the ruling, which could come as soon as Thursday, the foundation of the NFL’s television business could crumble. The league has already signed billions of dollars worth of contracts with broadcasters and cable companies for the rights to air its games for the next seven years. But a thriving Aereo could help fans bypass the broadcasters, devaluing their expensive contracts with the NFL.