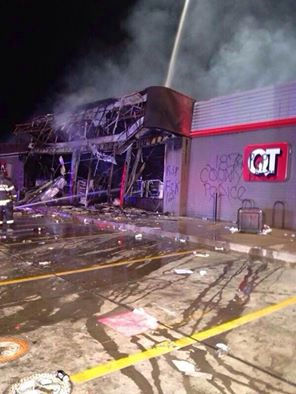 WASHINGTON (NNPA) – The shooting death of Michael Brown, an unarmed Black teenager in Ferguson, Mo., and the protests that followed  were not only the product of the longstanding tension between Blacks and the police, the tragic events were also sparked by a century of housing segregation promoted by federal, state and local policies, according to a new report by the Economic Policy Institute (EPI).

Richard Rothstein, a research associate at the nonpartisan think tank and author of the report, said that the long pattern of housing segregation was not an accident.

The report said that “In St. Louis these governmental policies included zoning rules that classified White neighborhoods as residential and Black neighborhoods as commercial or industrial; segregated public housing projects that replaced integrated low-income areas; federal subsidies for suburban development conditioned on African American exclusion,” and restrictive covenants that made it illegal for Whites to sell property or even rent to Black families in certain neighborhoods, despite their relative incomes.

St. Louis ordinances that deemed Black neighborhoods suitable for commercial development that was barred in the White suburbs contributed to the slum-like conditions found in the inner city.

“Not only were these neighborhoods zoned to permit industry, even polluting industry, but taverns, liquor stores, nightclubs, and houses of prostitution were permitted to locate in African American neighborhoods, but prohibited as violations of the zoning ordinance in residential districts elsewhere,” stated the report.

The report noted that the Federal Housing Administration (FHA), established during the New Deal and crafted to support White homeownership, denied those same opportunities to Blacks.

The EPI paper included analysis of the FHA’s impact on Black homeownership released by the United States Commission on Civil Rights’ (CCR) in 1959.

“Nonwhite home buyers and renters have not, however enjoyed the benefits of FHA mortgage insurance to the same extent as whites. According to testimony given before this Commission, less than 2 percent of the total number of new homes insured by FHA since 1946 have been available to minorities. Most of this housing has been all-Negro developments in the South.…Although the relatively low participation [of ] nonwhites has in part been due to their lower incomes, FHA bears some responsibility,” stated the CCR report. “Of great significance in this respect are FHA’s policies with regard to the discriminatory practices toward Negroes of real estate boards, homebuilders and lending institutions. For the first 16 years of its life, FHA itself actually encouraged the use of racially restrictive covenants. It not only acquiesced in their use, but in fact contributed to perfecting them.”

The 1959 CCR annual report continued: “The 1938 FHA Underwriting Manual, which contained the criteria used in determining eligibility for receipt of FHA benefits, warned against insuring property that would be used by ‘inharmonious racial groups,’ and declared that for stability of a neighborhood, ‘properties shall continue to be occupied by the same social and racial classes.’ The Manual contained a model restrictive covenant which FHA strongly recommended for inclusion in all sales contracts.”

The EPI report said that although many of the laws that encouraged housing segregation were prohibited in the late 20th century their effects still linger today.

Rothstein said that that there’s no way to raise the achievement of low-income African American students as long as they’re locked into segregated, high-poverty schools.

Rothstein said that because the segregation of metropolitan areas nationwide and the creation of virtually all-Black, low-income communities like Ferguson was not a result of “White Flight” or private prejudices, but instead caused by specific governmental policies, the remedies will also require government intervention.

“It’s a mistake to think that the problems being protested in Ferguson are simply about the interactions between police and Black men and boys in the community,” said Rothstein.

Rothstein continued: “Unless we understand how Ferguson went from being a all-White suburb to a virtually all-Black suburb we’re never going to be able to get to the root of the police problems or any other problems that the community faces.”