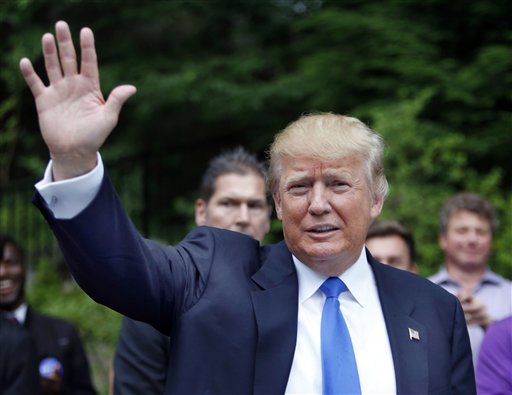 In this June 30, 2015, photo, Republican presidential candidate Donald Trump waves as he arrives at a house party in Bedford, N.H. Hispanic leaders are warning of harm to Republican White House hopes unless the partys presidential contenders do more to condemn Trump, whos refusing to apologize for calling Mexican immigrants rapists and drug dealers. (AP Photo/Jim Cole)

Several 2016 contenders have brushed off Trump’s comments while others have ignored them. Marco Rubio, a Florida senator who is Hispanic, denounced them as “not just offensive and inaccurate, but also divisive,” after declining for two weeks to address the matter directly. Another Hispanic in the race, Ted Cruz, said Trump is “terrific,” ”brash” and “speaks the truth.”

It’s an uncomfortable moment for Republicans, who want more votes from the surging Latino population.

And it could be a costly moment if more candidates don’t go beyond their Donald-will-be-Donald response and condemn him directly, said Alfonso Aguilar, a Republican who leads the American Principles Project’s Latino Partnership.

“The time has come for the candidates to distance themselves from Trump and call his comments what they are: ludicrous, baseless and insulting,” Aguilar said. “Sadly, it hurts the party with Hispanic voters. It’s a level of idiocy I haven’t seen in a long time.”

So far, Trump has paid less of a political price than a commercial one.

The leading Hispanic television network, Univision, has backed out of televising the Miss USA pageant, a joint venture between Trump and NBC, which also cut ties with Trump. On Wednesday, the Macy’s department store chain, which carried a Donald Trump menswear line, said it was ending its relationship with him. Other retailers are facing pressure to follow suit.

In his speech last month marking his entry into the Republican race, Trump said Mexican immigrants are “bringing drugs. They’re bringing crime. They’re rapists. And some, I assume, are good people.”

The businessman has refused to back down, although he insists his remarks were misconstrued.

“My statements have been contorted to seem racist and discriminatory,” he wrote in a message to supporters on Thursday. “What I want is for legal immigrants to not be unfairly punished because others are coming into America illegally, flooding the labor market and not paying taxes.” His original comments, though, did not make a distinction between Mexicans who came to U.S. legally and those here illegally.

His rhetoric may resonate with some of the Republican Party’s most passionate voters, who have long viewed illegal immigration as one of the nation’s most pressing problems. But the 2016 contest brings opportunity for the party to make inroads with Hispanics, with several Latino candidates and a former Florida governor, Jeb Bush, who has deep Latino ties and speaks Spanish and hasn’t been shy about using it in the campaign.

Even so, Bush has said little more about Trump’s comments than that they were “wrong.”

“Maybe we’ll have a chance to have an honest discussion about it onstage,” Bush said last weekend while campaigning in Nevada, referring to Republican presidential debates.

Rev. Gabriel Salguero, president of the National Latino Evangelical Coalition, is paying keen attention to how the candidates respond to Trump’s “xenophobic rhetoric.”

“We’re listening very, very closely, not just what candidates say but what they don’t say — the sins of commission and the sins of omission,” he said.

—Cruz said he likes Trump and thinks NBC “is engaging in political correctness” in breaking ties with him.

—Rubio said the next president “needs to be someone who brings Americans together — not someone who continues to divide.”

Not since the 2004 re-election campaign of President George W. Bush has a Republican presidential candidate earned as much as 40 percent of the Hispanic vote. Mitt Romney got a dismal 27 percent in the 2012 contest against President Barack Obama.