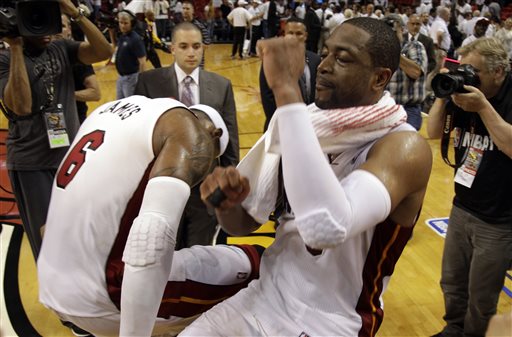 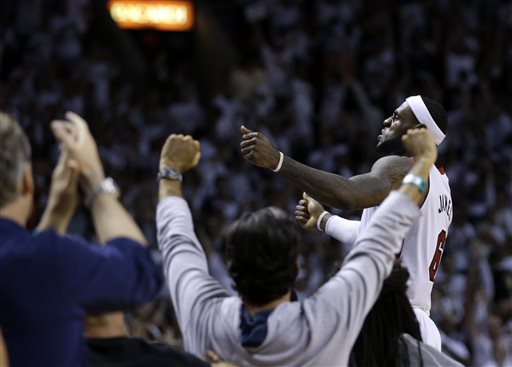 Miami Heat forward LeBron James celebrates their 96-94 win against the Brooklyn Nets during after Game 5 of a second-round NBA playoff basketball game in Miami, Wednesday, May 14, 2014. (AP Photo)

MIAMI (AP) — A game, a series, a season, they all would hinge on one shot.

That is, if the shot was taken.

Ray Allen and LeBron James would have none of that. They swarmed Brooklyn sharpshooter Joe Johnson and knocked the ball away — twice, actually — in the final moments, and the Miami Heat reached the Eastern Conference finals for the fourth consecutive year by rallying past the Nets 96-94 on Wednesday night.

Miami led for only 32 seconds after halftime — the final 32 seconds.

Sure looks easy. It was the 10th straight series win for the two-time defending NBA champions.

James scored 29 points, Dwyane Wade added 28 and Allen hit the 3-pointer that gave Miami its first and only lead since the second quarter. The Heat won the series 4-1, a far cry from the 4-0 edge Brooklyn had in the regular-season matchups between the clubs.

For much of the night, Brooklyn was making enough plays.

The Nets led by 10 points in the third quarter and got a virtuoso performance from Johnson, a game-high 34 points on 15 for 23 shooting. He just never got that 24th shot off.

Johnson took an inbounds pass in the right corner with 4.4 seconds left, was defended by James as he worked toward the lane, and lost the ball when Allen got his right hand on it with 1.8 seconds left. Johnson grabbed the ball but James knocked it away as time ran out.

“Obviously, we thought this was a game we should have won,” Johnson said.

Chris Bosh scored 16 and Allen finished with 13 for Miami, which is in the East finals for the sixth time since 2005. Paul Pierce scored 19 and Deron Williams had 17 for the Nets, who led by eight with 4:49 remaining — and didn’t score again until the final moments, after the Heat put together a 12-0 run that decided everything.

“Sometimes things have to go perfectly when you play the best team in the NBA,” Pierce said.

Eventually, Miami broke through. And Heat coach Erik Spoelstra kept telling his team it would happen.

“You guys are built for this,” he said in one stoppage.

With the Heat down by one in the final minute, James passed to Mario Chalmers, thinking he would take a potentially go-ahead shot. Instead, Chalmers saw Shaun Livingston help off Allen and come his way. So Chalmers passed to a suddenly open Allen, who hit a 3-pointer and the Heat wouldn’t trail again.

So was Johnson, who made tough shot after tough shot, even while defended by James. When Johnson hit a contested jumper with 4:49 left, it was 91-83 and the Nets seemed on the brink of victory.

Then Miami scored the next 12 points, and that was enough.

“It was just about getting stops,” Wade said. “We knew offensively that we needed to execute, but we knew we weren’t going to win the game unless we got some stops.”

For the Nets, more than $180 million in salary and luxury tax was supposed to bring a championship. Instead, billionaire owner Mikhail Prokhorov got only a trip to the second round as his return on a massive investment. Brooklyn played much of the season without center Brook Lopez, struggled through the first two months, then turned it on after Jan. 1.

“A lot of people counted us out,” Williams said.

Some big decisions — mainly regarding the futures of Pierce and Kevin Garnett — are looming. Pierce will be a free agent; Garnett has a year left on his deal, though it’s been speculated he will consider retirement.

NOTES: Wade had 12 points in the first quarter, his highest-scoring output from an opening period in his last 179 regular-season and playoff games. … Both of Johnson’s 30-point games in these playoffs came on the road. He had 32 at Toronto on April 30.