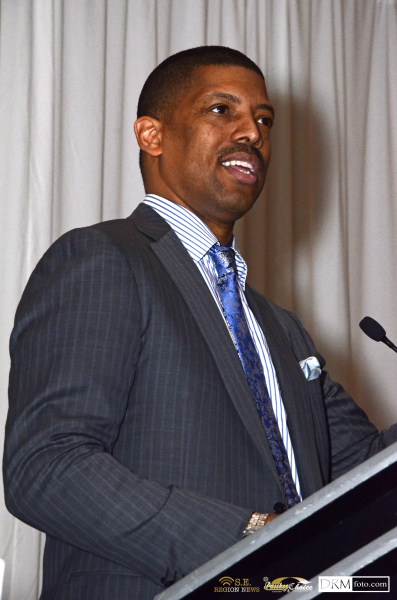 ATLANTA (NNPA) – Sacramento, Calif. Mayor Kevin Johnson, the newly-elected president of the National Conference of Black Mayors (NCBM), told his colleagues that if they don’t improve the lives of their constituents, they don’t deserve to remain in office.

“We got these good seats, we’ve been elected and we get honored and esteemed everywhere we go,” Johnson said at a luncheon here at the group’s 39th annual convention. “It’s not just for us. It’s for the communities that we represent. Our obligation is to bring more and more people along. Because if we don’t do that, then we’re not fit for the seats that we hold.”

Johnson, a former star NBA point guard for the Phoenix Suns, cited the enormous growth of the mayors’ group. He noted that the NCBM began as a small, Southern organization in 1974 and now is a national force with nearly 700 mayors in the U.S., representing 48 million people or 15 percent of the U.S. population.

In recent years, it has expanded its international reach and now has more than 26,000 mayors on its roll, including many from Nigeria, Senegal, Uganda, Columbia and throughout the Caribbean.

“In terms of [population served], we’re bigger than Spain, Canada and Australia,” Johnson said. “Think about that. If we come together in numbers, we have that type of strength as an organization to do some remarkable things.”

In too many cases, Johnson said, the answer is no.

Because mayors work so closely to people, they are in position to bring about some fundamental change.

“We’re where the rubber meets the road,” Johnson explained. “Don’t expect Washington to solve our problems. That’s what this organization is all about.”

He said, “I’m just saying to us today, we have an opportunity to do something really special. And it’s not only about talk, it’s about us holding ourselves up and banding together as one unit and making sure our voices are heard, that we have a seat at the table

Johnson was passionate as he discussed the future of the organization.

He also said, “There are many people who counted us out. They said over and over, this organization can’t last. And we’re standing here after 39 years and the best days are ahead.”