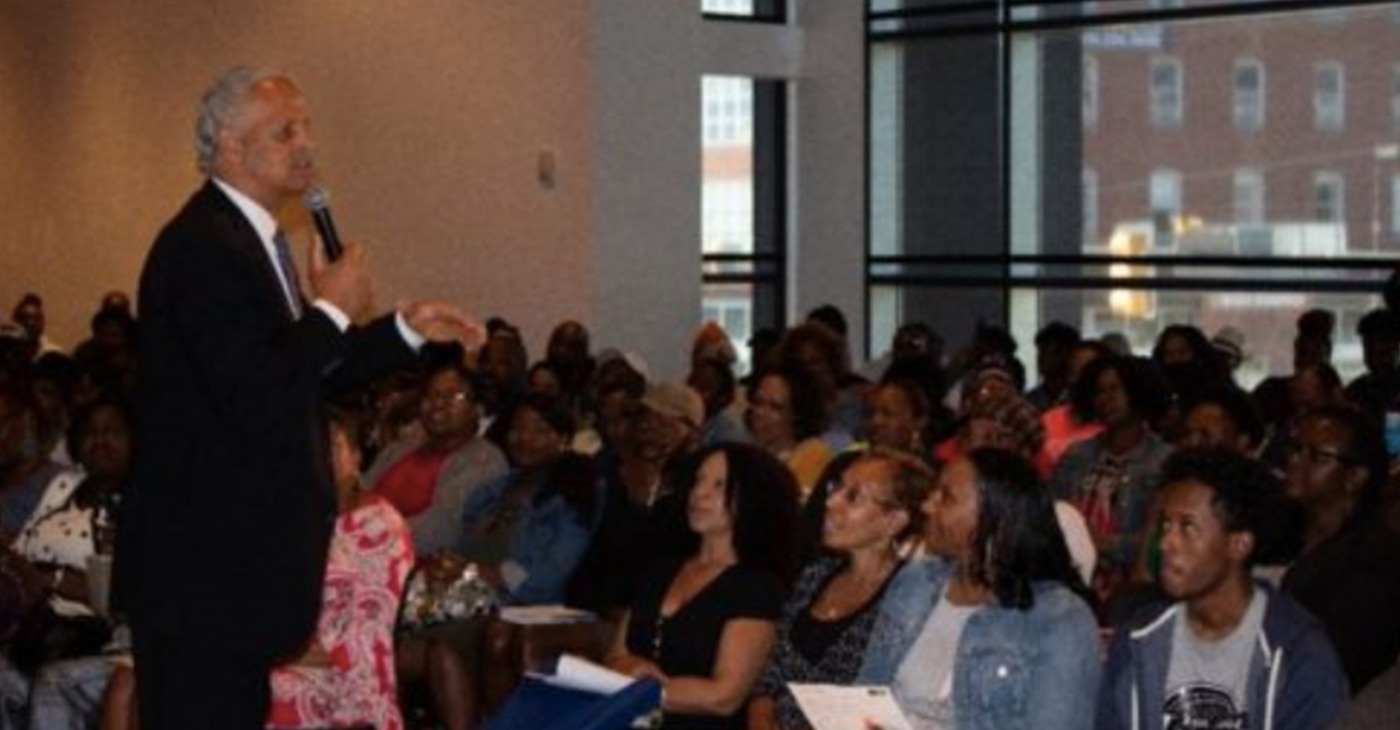 By The Chicago Defender

While statistics may paint a grim picture of Black homeownership, a recent event in Baltimore laid out a clear path for turning those numbers around across the country.

Anyone questioning whether the Black community is primed to join the ranks of homeowners need only look to an innovative event in Baltimore that took place June 22. Nearly 700 people came away with the inspiration, education and motivation to make the goal of homeownership a reality when HomeFree-USA launched its Step Into Your Power: Prepare for Success Through Homeownership initiative to an enthusiastic audience of African American homebuyers in Baltimore City.

More than 500 homebuyers participated in a live event at the Reginald Lewis Museum, while an additional 166 participated via live stream and a second event that was held to accommodate the overflow crowd.

Homeownership is the number one wealth indicator and accounts for 92 percent of Black wealth. Yet, the Great Recession of 2008 wiped out 48 percent of that homeownership wealth and African-Americans are continuing to fall even further behind in homeownership compared to other segments. In fact, the Black homeownership rate has fallen to the lowest level ever as of the first quarter of 2019, according to Census data.

With Black Americans making up 63.3 percent of Baltimore’s population, the decline in Black homeownership poses a particular threat to Charm City. Step Into Your Power is a groundbreaking way to turn those homeownership numbers around and the kickoff event showed that many Baltimore residents agree.

HomeFree-USA Founder Marcia Griffin welcomed attendees and talked candidly about the crisis in the Black community around the wealth gap, sharing how homeownership can help Black Americans improve their financial standing. HomeFree-USA also shared that homebuyers may be able to take advantage of up to $42,000 in financial assistance.

Some attendees pointed to the gentrification that has taken place inWashington, DC in the last few years and expressed their belief that Baltimore may realize the same fate. As a result, several attendees saw buying in Baltimore as an opportunity to both stop gentrification from pushing people from the city they love and a chance to be a homeowner in the city where they were born
and raised.

Other attendees expressed their desire to buy a home so they can pass it down to their children and grandchildren.

Attendees also learned that organizations like HomeFree-USA can provide them with the financial education and the know-how to make their dream of homeownership a reality.

HomeFree-USA will host a series of Step Into Your Power events in Baltimore over the next 5 months designed to guide, educate, and coach first-time Baltimore City homebuyers to mortgage-readiness, default resistance and homeownership. Upon success in Baltimore, the initiative will be launched in other cities with a significant number of African American residents. One goal of the Step Into Your Power program is to get 10,000 African American families mortgage-ready around the country by the end of 2020.

Entrepreneur and educator Stedman Graham, author of the recently released book, Identity Leadership, delivered the keynote address in Baltimore and spoke about how one must learn to lead oneself before one can lead others. Graham has been teaching self-actualization principles that help people discover who they can be, and he brought those insights to energize Baltimore residents as they prepare for success.

Strong partnerships underscore the strength of the initiative and were highlighted at the event.

“Step into Your Power: prepare for success through homeownership is a terrific example of working together to make a positive impact toward boosting Baltimore City homeownership,” said Lisa Thomlinson, program manager with Wells Fargo Housing Philanthropy.

Wells Fargo showed its commitment to Baltimore by offering qualified homebuyers up to $15,000 for down payment and closing costs through a program called NeighborhoodLIFT. “Just as in many communities across the country, far too many families struggle with housing affordability in Baltimore,” Thomlinson says. “That’s why Wells Fargo teamed-up with HomeFree-USA and Stedman Graham to make a concerted effort to bring our business expertise forward and combine it with available resources including NeighborhoodLIFT Home Ownership Counseling grants for interested homebuyers.”

Freddie Mac is also providing financial support to ensure that Step Into Your Power reaches as many potential homebuyers as possible. Step Into Your Power is a means for increasing the homeownership rate among African Americans and reducing the wealth gap in America. It also is designed to help Black Americans break the cycle of renting and begin to make homeownership an achievement that is passed down from generation to generation.

“This event marks the revival of the spirit to buy in Baltimore,” says Milan Griffin, Vice President of Marketing and Outreach for HomeFree-USA. “Thanks to Step Into Your Power, Baltimore residents see the opportunity homeownership presents and have a pathway to get there.”

This article originally appeared in the Chicago Defender.