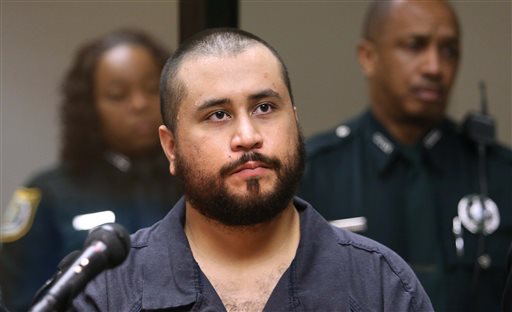 In this Tuesday, Nov. 19, 2013, file photo, George Zimmerman, acquitted in the high-profile killing of unarmed black teenager Trayvon Martin, listens in court, in Sanford, Fla., during his hearing on charges including aggravated assault stemming from a fight with his girlfriend. Zimmerman is asking a judge to change the terms of his bond so he can have contact with his girlfriend. Zimmerman on Monday, Dec. 9, 2013, filed an affidavit from his girlfriend that says she doesnt want him charged with aggravated assault, battery and criminal mischief. (AP Photo/Orlando Sentinel, Joe Burbank, Pool, File)

ORLANDO, Fla. (AP) — Prosecutors are considering whether to move forward with domestic violence charges against George Zimmerman even though his girlfriend is asking them not to do so.

Without a witness willing to testify, prosecutors can still use law enforcement reports, 911 calls and other witnesses to build a case. But such cases are more difficult to prove, State Attorney’s Office spokeswoman Lynne Bumpus Hooper said.

Zimmerman filed an affidavit from his girlfriend, Samantha Scheibe, saying she doesn’t want him charged with aggravated assault, battery and criminal mischief. The affidavit was filed with a motion Monday asking a judge to change the terms of his bond so he can have contact with Scheibe.

Zimmerman was acquitted of any crime last summer in the 2012 shooting death of 17-year-old Trayvon Martin, a case that sparked a nationwide debate about race and self-defense laws. Zimmerman, who identifies himself as Hispanic, was accused of racially profiling the black teen, but said he shot Martin to protect himself.

In the signed affidavit, Scheibe — referring to Zimmerman as “my boyfriend” — said that detectives misinterpreted what she said and that she hadn’t been coerced into signing the document.

“I am not afraid of George in any manner and I want to be with him,” Scheibe wrote.

It’s not uncommon in domestic violence cases for the alleged victims to change their minds about pursuing charges, said Blaine McChesney, a former prosecutor in Orlando who now is a defense attorney.

“The feelings of love and compassion overcome any feelings the victim had,” McChesney said Tuesday.

Although prosecutors can move ahead without the cooperation of the victim, it makes it difficult to convict if there is no physical evidence of injuries, he said.

“Juries really want to see the alleged victim on the stand talking about the case,” McChesney said. “It’s very hard to convict in a case when the victim isn’t there.”

However, in Zimmerman’s case, Scheibe provided a real-time account of what was happening on a 911 call.

Some victims refuse to cooperate believing the person who assaulted them will wind up in prison, said Carol Wick, chief executive of Harbor House of Central Florida, which offers shelter and programs to victims of domestic violence.

In reality, the courts offer alternatives to prison such as mandatory therapy and anger management classes. In metro Orlando, where more than half of the cases that end up being dropped are due to victims unwilling to testify, police are starting a program that tries to get victims in touch with counselors within 24 hours of a reported assault.

“People don’t understand the psychological manipulation that goes on when this happens,” Wick said.

Zimmerman’s Miami-based defense lawyer, Jayne Weintraub, said in a phone interview that she wants the State Attorney’s Office to reconsider the entire case in light of Scheibe’s statement.

“I’m hoping that the prosecutors will take a good hard look at this and take the target off of George’s back and drop the charges,” Weintraub said.

She said a hearing will be scheduled in the near future to discuss the motion and affidavit.

Obama to travel to South Africa to honor Mandela