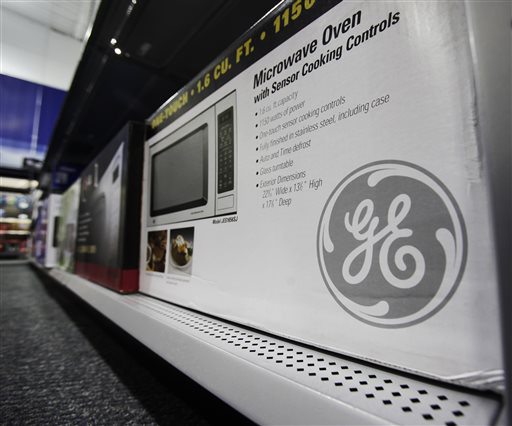 In this photo made Oct. 14, 2009, a General Electric (GE) microwave is shown at Best Buy in Mountain View, Calif. (AP Photo/Paul Sakuma, File)

GE paid $314,511 last year for Immelt’s two life insurance plans, the most for a CEO in the Standard & Poor’s 100 Index, according to data compiled by Bloomberg. It’s one of a shrinking number of companies offering coverage designed exclusively for top managers. On the lower end, JPMorgan Chase & Co. and Apple Inc. spent $101 and $2,520, respectively, on policies for CEOs Jamie Dimon and Tim Cook.

While many boards have scaled back executive perquisites after increased disclosure requirements and heightened scrutiny of pay practices, life insurance benefits — a ubiquitous part of estate planning for high-earning Americans because of the tax advantages — have received little attention.

Life insurance expenses are often lumped together with “an array of deferred compensation-related items, making it hard for investors to parse the details,” said Michael Pryce-Jones, director of corporate governance at CtW Investment Group, which advocates for pension funds that collectively manage $250 billion. “I don’t think it’s on the radar for shareholders in the way it should be.”

Boomerang Home Buyers Poised to Return to Market with a Roar