Freddie Gray Is Mourned at Funeral in Baltimore
Advertisement 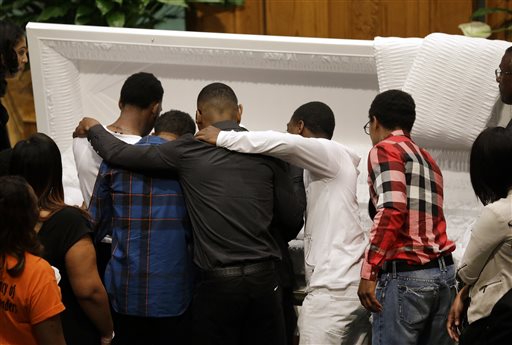 Mourners embrace as they gather in front of the casket containing the body of Freddie Gray before his funeral, Monday, April 27, 2015, at New Shiloh Baptist Church in Baltimore. (AP Photo/Patrick Semansky)

BALTIMORE (The New York Times) — With the words “black lives matter” projected in capital letters on the walls, thousands of mourners gathered at a Baptist church here on Monday for the funeral of Freddie Gray, the 25-year-old whose death from a spinal cord injury while in police custody set off protests that turned violent over the weekend.

Friends, neighbors, activists and government officials from the local level to the White House filed past the open white coffin bearing Mr. Gray’s body in New Shiloh Baptist Church, sharing hugs and handshakes with one another, and with members of Mr. Gray’s family seated in the front row. The church, with seating for 2,200, was filled to overflowing, with many people standing inside and more standing outside, unable to crowd in.

Even as people were searching for seats, the Baltimore Police Department announced what it called a credible threat that street gangs “have entered into a partnership to ‘take out’ law enforcement officers.” But inside the church, the focus was on how the police and government must change.