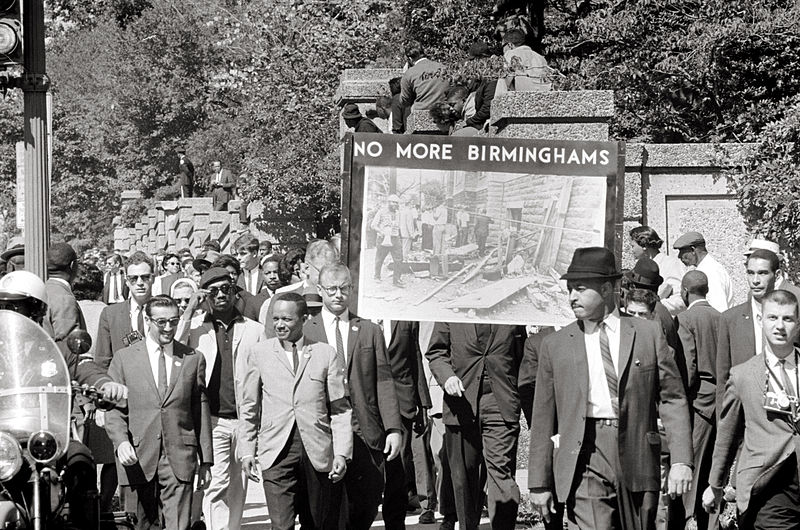 The Congress of Racial Equality and members of the All Souls Church march in memory of the 16th Street Baptist Church bombing victims in September 1963.

On the heels of the commemoration of the 50th anniversary of the 1963 March on Washington, a darker moment of that year was recognized Sept. 10.

The four little girls who died in the bombing of the 16th Street Baptist Church in Birmingham, Ala. were posthumously awarded one of the nation’s highest civilian awards—the Congressional Gold Medal.

The medals go to the families of Addie Mae Collins, Denise McNair, Carole Robertson and Cynthia Wesley, four young girls aged 11 to 14, who were preparing for Sunday school Sept. 15, 1963 when a bomb planted by some members of the Ku Klux Klan exploded, killing them and injuring 22 other people in the building.

“As a direct beneficiary of their sacrifice, I was honored that my first piece of legislation honored the four little girls with the highest civilian honor Congress can bestow upon any individual,” Rep. Terri Sewell (D-Ala.) said in a ceremony in the U.S. Capitol’s Statuary Hall.

“I not only question where I would be today without the influence of the four little girls but more importantly, I question where America would be. The premature and senseless deaths of these girls awakened the slumbering conscience of America and galvanized the Civil Rights Movement,” Sewell said at the ceremony.

“So many people have worked hard to make this day possible and understanding that the tragic loss and heart break help to trigger this process,” Obama said as he signed the legislation authorizing the striking of the medals.

“We are awarding posthumously a Congressional Gold Medal to…..the four little girls who lost their lives 50 years ago in the bombing of the 16th Street Baptist Church,” President Obama said May 24 as he signed legislation sponsored by Sewell to strike the gold medals.

“This is a great moment and a great privilege for me,” he said.

Sewell, in whose district the church is located, is part of a congressional delegation to the medal presentation ceremony in Birmingham Sept. 13 at the church.

Sewell is also to conduct a discussion panel featuring members of the Congressional Black Caucus including Rep. John Lewis (D-Ga.), an icon of the civil rights era, Rep. Marcia Fudge (D-Ohio), chairwoman of the Black Caucus, and Rep. John Conyers (D-Mich.), the longest serving Black member of Congress. In all, 14 members of the CBC were scheduled to appear at the event.

Yes, the Rich are Getting Richer