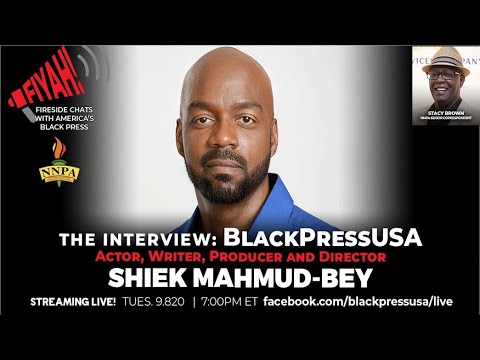 It is rare in Hollywood that you find an actor who has built up an impressive body of work in theater, film and television. Shiek Mahmud-Bey is one of Tinsel Town’s most talented actors who continues to evolve in the entertainment industry.

Shiek barely takes a breather in between starring roles, writing, directing, producing and simply creating. It’s exactly how he likes it and, anything less, would be a contrast of the Brooklyn, N.Y. go-getter whose toughness is hereditary.

Shiek’s father spent a career as a United States Army Sergeant Major while his mother, a celebrated neighborhood cosmetologist, kept the family of five children grounded.

When he went to see the Broadway production of “The Wiz” starring Stephanie Mills, Shiek knew then that the stage and screen was calling his name. In full “go for it” mode, he tackled the stage with the Char “Actors” Improvisation Theater Company with Roni Dengel, Fredrick Rolf and the late Adolf Caesar. There, he came to understand how much his passion for the screen and stage had grown.

With legendary actor Morgan Freeman helping to serve as an inspiration, Shiek enrolled in film production, cinematography and writing classes at New York University, ultimately sharpening his craft and business acumen. That was followed by Shiek’s eye-opening portrayal of Rubin “Hurricane” Carter in the off-Broadway hit, “The Way Out,” a production he helped develop, earning critical praise from Playbill, the New York Times and other publications and allowing him to easily claim the Best Performance honors from the New York International Fringe Festival.

Shiek followed that effort with a sold out run of “Acts of Contrition,” where he portrayed a Catholic Priest accused of Pedophilia, a role he had to fight hard to convince producers to cast him in.

Showing his versatility, Shiek starred as a series regular in the former NBC detective drama, “The Profiler.” His performance in the big screen crime drama, “Night Falls on Manhattan,” was a tour de force of Shiek’s prowess as critics raved that he stole the show from such Hollywood heavyweights as Garcia and the legendary Richard Dreyfuss.

Continuing his workaholic mentality and uncanny ability to just hit the ground running, Shiek has also started Collaborations New York and Collaborations Detroit, where he brings together actors, directors, producers, casting and other key players to showcase up and coming talent.

Under the umbrella of his 25th Frame Films production Co., Shiek has numerous projects in the works, showcasing his abilities as an actor, writer, producer and director. We talk with Shiek on a livestream at 7 p.m. Tuesday, September 8.