Rosamund Pike makes a lot of good choices. Check out her filmography and some of her very impressive feminist roles: A courageous war correspondent in A Private War, gusty widow in Hostiles, stoic wife in an interracial marriage in A United Kingdom and cunning spouse in Gone Girl. Now this.

Pike portrays world-renown physicist and chemist Marie Sklodowska Curie. She explores the life of the Poland-born, naturalized French citizen who pioneered and advanced the science of radioactivity and discovered the elements polonium and radium. Radium produced a radioactive gas used to treat some forms of cancer and is also used in x-rays.

The source material is a National Book Award Finalist biography by Lauren Redniss, Radioactive: Marie & Pierre Curie: A Tale of Love and Fallout. It chronicles the ascent, love affairs, findings, achievements, awards and tragic endings of both Marie and her husband. British screenwriter Jack Thorne (TV mini-series National Treasure) wrote the screen adaptation. Director Marjane Satrapi (Oscar nominee for Best Animated Feature for Persepolis) helmed the production. Between the strong intelligent script and her artistry this turn of the 20th century parable glows. 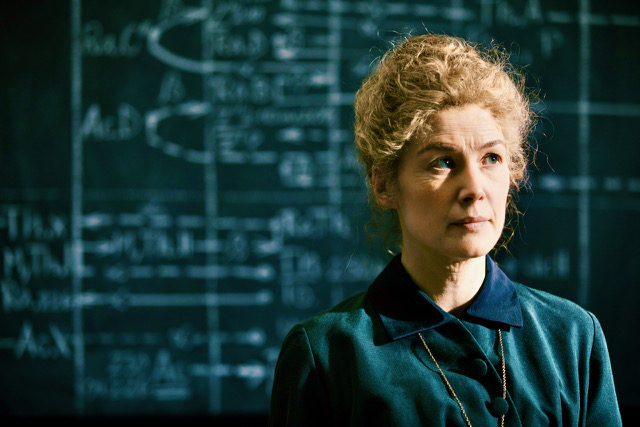 The magic of those days is chronicled by cinematographer Anthony Dod Mantle (Oscar winner for Slumdog Millionaire), whose footage often looks antique. Bits and pieces, scenes and sequences are pulled together by editor Stéphane Roche (Persepolis) into a 1h 49min brisk diary that captures Curie’s experiences with a very steady rhythm. 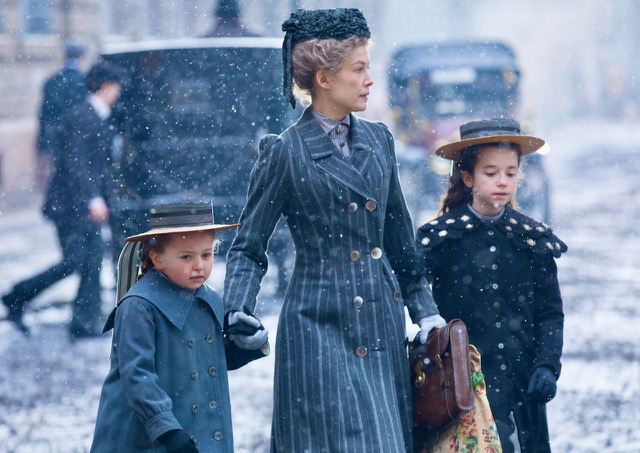 Early 1890s Paris. Maria Sklodowska (Pike) is the only female in a room full of 23 scientists at an industrial laboratory run by the arrogant Professor Lippman (Simon Russell Beale, Mary Queen of Scots). Hosting her does not please him, and her unapologetic manner hastens her exit. She looks for other places to run her experiments, to no avail. Maria then lucks up on a chance encounter with another fringe scientist, Pierre Curie (Sam Riley, Control), who offers her a spot at his lab. It isn’t love at first sight: Maria, “I want to make it clear that I will not be your mistress.” However, he is smitten.

Working side-by-side the two become collaborators, lovers, then husband and wife, with Maria becoming Marie Sklodowska Curie. Their field of interest is radiation, and though other scientists are chasing the same dreams, it is Marie who coins the term “radioactivity.” Together in 1903, Marie and Pierre co-win half of a Nobel Prize for Physics for their research on and analysis of spontaneous radiation, which was discovered by Henri Becquerel. Becquerel is awarded the other half of the Prize.

Prospective audiences should not be deterred by the physics and chemistry involved in Curie’s story. Yes, sometimes it’s like you’re sitting in a science class taught by two teachers who can’t keep their hands off each other. But for the most part, that discipline almost subordinates Marie Curie’s fight to make discoveries, be respected and take her rightful place in the world of academia and an industry dominated by men. Through the insight of a superbly written and intimate screenplay and under the direction of a filmmaker who is as fascinated by the familial and romantic elements as she is by the science, viewers will find increasingly compelling drama, in and outside of the lab. 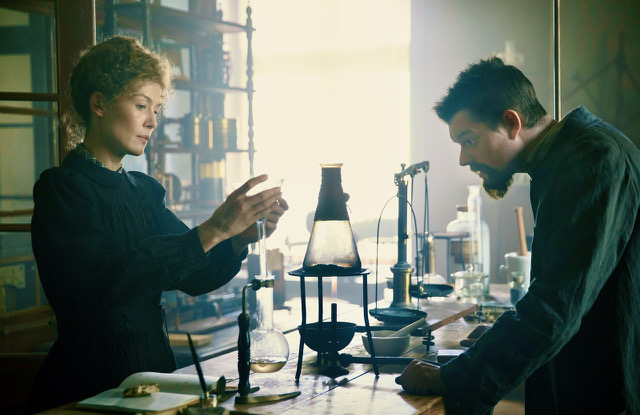 Pike diligently and sensitively portrays the inner turmoil that churns inside Curie and erupts as a steely determination. Fragility and bravery embrace a stream of conflict that propels Curie forward. Pike harnesses that fiery life-force as she depicts a student becoming a professional, a lover transitioning into a wife, a widow finding her way as a single mother and a scientist slowly dying from the element that gave her fame.

Pike’s emotions run the gamut from curiosity to anger and jealousy, fear to happiness, pride to sadness. The multiple layers and gravitas are only achieved because Pike digs deep inside the feisty character. Her most primal moment is when she cries over her husband’s coffin, emitting the most guttural sounds.

Fledgling filmmakers should take a critical look at Marjane Satrapi’s inventive and clever style. Without her eclectic flair, this could have been just another period piece. She shows her appreciation and disgust for the legacy of radiation, in vivid images—from radiotherapy acting as a cancer killer, to atom bombs annihilating Hiroshima. These visions display an unconventional approach that elevates what’s on view. And her keen ability to create a story that female audiences are sure to admire should have producers banging down her door with offers

Curie was the first woman to win a Nobel Prize. The only person to win the Prize twice. The only person to win in two different fields (physics and chemistry). She worked on the frontlines during WWI, developing mobile radiography units that diagnosed the injuries of millions of soldiers. Her story is old, centuries old. Yet somehow her challenges and successes feel timely, as if they just happened yesterday

As much as Marjane Satrapi is the genius behind the camera, Rosamund Pike is the gifted artist in front of the lens. She turns this portrait of a groundbreaking heroine into an impressive allegory about a scientist who fought her way to the top leaving a legacy behind that has yet to be equaled.

COMMENTARY: Monsters Are Scary. So Are Brilliant Black Women.