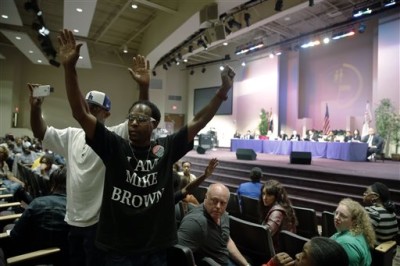 In this Sept. 9, 2014 file photo, Marurice Brown raises his arms during a public comments portion of a meeting of the Ferguson City Council, back right, in Ferguson, Mo. Candidates for the first municipal election in Ferguson since a fatal police shooting brought the St. Louis suburb international notoriety face a filing deadline Tuesday, Jan. 20, 2015. Ferguson is nearly 70 percent black, all but one of its elected leaders is white. (AP Photo/Jeff Roberson, File)

(Bloomberg) – Next week, Crystal Stovall will choose between two black candidates running to represent her City Council ward in Ferguson, Missouri. The election is the first chance at citizen-led change in the St. Louis suburb nationally notorious for racial turmoil.

Voters from Chicago to Anchorage, Alaska, will head to the polls Tuesday. The closest-watched contest may be in Ferguson, where the first election since riots rocked the city of 21,000 will test whether angry calls for justice translate into voter turnout.

Stovall, 33, twice marched to protest the Aug. 9 killing of a black teenager by a white police officer outside her apartment complex. But she didn’t join demonstrators who gathered nightly to chant at riot-gear-clad officers. Instead, she registered to vote.

“Protesting is fine and all that and dandy, but without any political change, nothing is going to happen,” Stovall, who is black, said on a sunny Monday morning as she pushed a stroller near where Michael Brown was shot. “You can protest till your lungs turn blue, but if the laws don’t change, it doesn’t matter.”