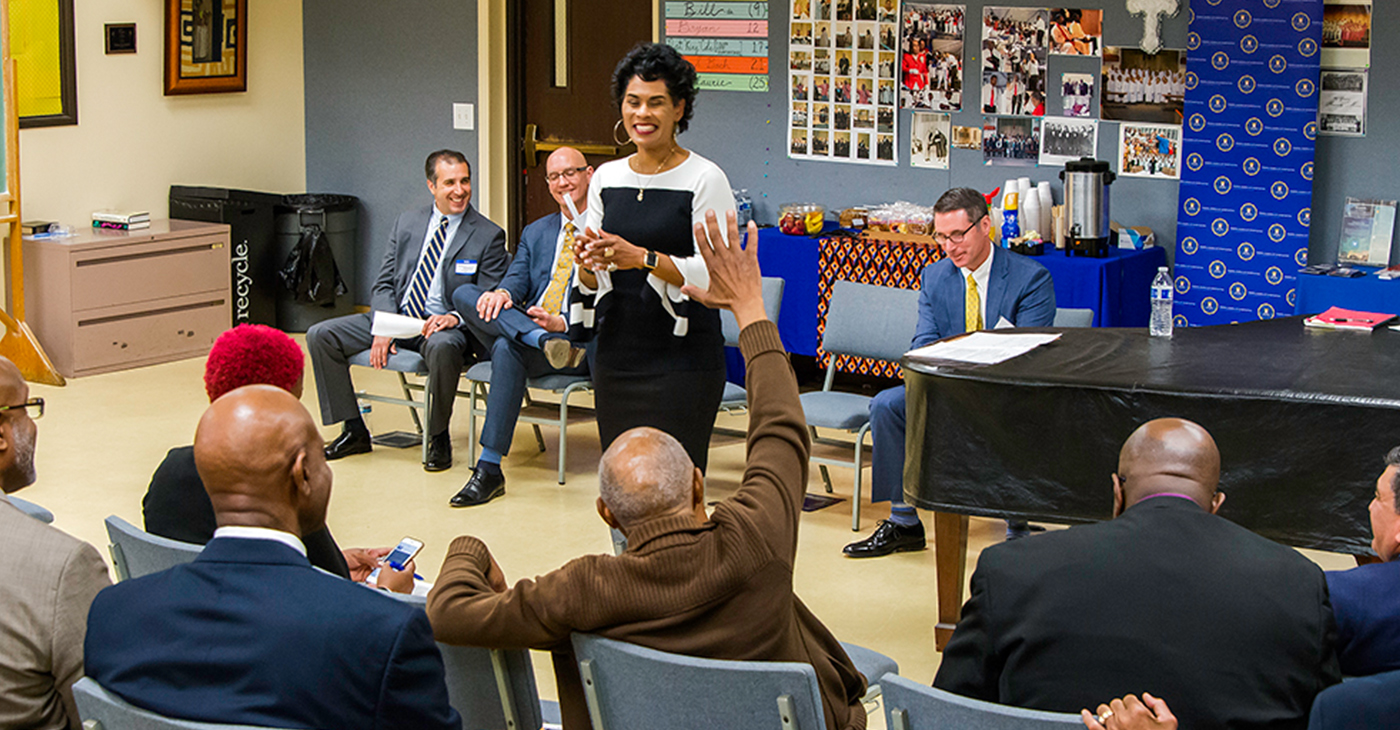 Members of the Federal Bureau of Investigation’s Los Angeles Division opened up a forum at Holman United Methodist Church March 26, to clergymen, activists and L.A. residents as part of a Faith Based Initiative, where they addressed concerns and provided insight into the role they play here. The meeting was meant to be an exercise in trust building between the FBI and the city’s Black community, a community whose members have had a shaky relationship with law enforcement at best. After introductions and a brief lesson in FBI history and purpose, attendees were allowed to raise concerns regarding physical and cyber security, law enforcement practices and youth recruitment efforts by the organization.

A notable question, had to do with the protection of black churches from possible attacks.

“I know there’s a lot of attention on synagogues and mosques right now,” began one attendee, “but there are a lot of threats in this climate of America on Black churches. And, one of the things that we need to understand is that there is money from the Federal Government, for homeland security… please find out about that,” he asked, “so that we can be a part of that money, particularly churches that are large and are speaking out on things.”

On March 16, 50 people were killed in an Islamaphobic attack on Christchurch Mosque in New Zealand.

“Is there any kind of ongoing [meetings like this one], whether it’s monthly or quarterly so that our communities can be proactive before things like [the mosque] happen,” another attendee wanted to know.

“Of course we don’t know when an attack will happen,” she said, “but I know our church, we worship in a synagogue and we had someone come in… and since then we’ve had armed security, which is a huge thing for us because we’re not a large church but we care about our people. So maybe we can have meetings where we can say, ‘hey, what’s happening in cyber security? What’s happening in counter terrorism?’”

“We have a number of avenues like community action programs that can further cement our ties with the community,” said Paul D. Delacourt, assistant director in charge of the Los Angeles field office.

“We have as needed programs in our communities related to cyber security [for instance] where we can talk about things like business email compromise, which can be severely damaging to a church with a small budget.”

“Why are you really here? Why are you [holding this meeting],” another attendee asked.

“We reach out to a variety of communities,” said Delacourt.

“It is something that we prioritize and is important for us to do so.

“We also have a program called cyberhood watch. It’s basically a neighborhood watch program for cyberspace. [In that] we have a variety of different neighborhoods, we have elections. We have airports. We have the banking sector.

“So what that means is that we have conference calls on a monthly basis in our neighborhoods and also they have a reporting mechanism. So, if we’re seeing something in Orange County, and in South Los Angeles and in Riverside… those are obviously trends that we would like to see.”

From 1956 to 1971, the FBI conducted a series of covert and sometimes illegal projects under the name COINTELPRO (or Counter Intelligence Program), to address groups they deemed subversive. Included in those groups were the Black Panther Party and the Nation of Islam, both focusing their efforts on bringing American Blacks out of poverty and degradation. Many believe these projects led to the killing and arrests of group members and the eventual dismantling of the BPP.

At the March 26 meeting, some said they were surprised that FBI members would be coming to their neighborhood and that people they knew expressed disapproval of the event in general. FBI members said they were here to dispel those sentiments and to let people know they are actually a friend to the community. “If you call, we will come,” was one of the major themes of the forum.

“We hope to make this more than a one time thing,” said Delacourt.

“We hope to put processes in place to make sure this is more robust and regular.”

According to their website, “The FBI’s Community Outreach Program supports the Bureau’s investigative mission by working to address multiple interrelated societal problems—including crime, drugs, gangs, terrorism, and violence. Linking community service, prevention, and law enforcement is a national trend spurred by grass roots efforts around the country, and FBI employees have joined this movement, volunteering in a wide variety of community-related efforts…”