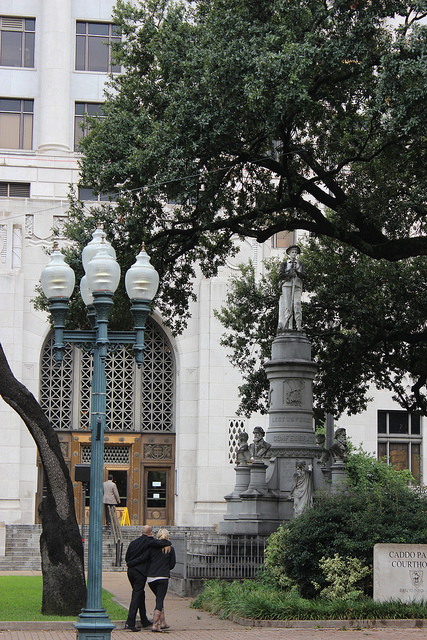 A Confederate Veterans Memorial stands in front of the Caddo Parish Courthouse in Shreveport, La. (Shreveport-Bossier Convention and Tourist Bureau/Flickr/CC BY-2.0)

SHREVEPORT, La. (The New York Times) — Here are some reasons prosecutors have offered for excluding blacks from juries: They were young or old, single or divorced, religious or not, failed to make eye contact, lived in a poor part of town, had served in the military, had a hyphenated last name, displayed bad posture, were sullen, disrespectful or talkative, had long hair, wore a beard.

The prosecutors had all used peremptory challenges, which generally allow lawyers to dismiss potential jurors without offering an explanation. But the Supreme Court makes an exception: If lawyers are accused of racial discrimination in picking jurors, they must offer a neutral justification.

“Stupid reasons are O.K.,” said Shari S. Diamond, an expert on juries at Northwestern University School of Law. Ones offered in bad faith are not.

In Louisiana’s Caddo Parish, where Shreveport is the parish seat, a study to be released Monday has found that prosecutors used peremptory challenges three times as often to strike black potential jurors as others during the last decade.

That is consistent with patterns researchers found earlier in Alabama, Louisiana and North Carolina, where prosecutors struck black jurors at double or triple the rates of others.

In Iowa, Sanders Says He Will Address Racial Divisions