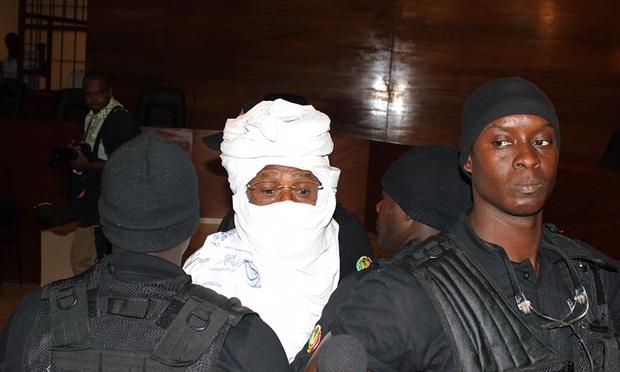 DAKAR, Senegal (AP) — The former dictator of Chad, Hissene Habre, said Tuesday he will win in his war crimes trial.

The ex-leader made the declaration in court after the judges finished reading out all of the charges and accusations against him, which include war crimes, crimes of torture and crimes against humanity. As he was taken from the courtroom in Dakar, Senegal, Habre raised two fingers in a victory sign and cried out “The plot will fail and we will win.”

His supporters applauded. He has charged that the trial is a political conspiracy against him.

Habre is being tried in a special court established by Senegal and the African Union to try him on accusations of being responsible for the deaths of around 40,000 people during his 1982-1990 rule, according to a Chad truth commission report. It is the first time one African country is trying the former leader of another for war crimes and crimes against humanity.

About 4,450 victims have filed charges against the former dictator, whose government and special police force they say is responsible for the torture and abuses they and family members endured. About 100 victims and experts will eventually take the stand. Experts begin testimonies Wednesday.

The former Chadian leader lived comfortably in exile for more than two decades in Senegal’s capital until he was arrested in 2013 and ordered to go before a special court.

The trial started again on Monday after a suspension in July to allow court-appointed lawyers to prepare his defense. He was brought into court by security on Monday and was forcibly held down after resisting participation. He eventually calmed down.

U.S. Urged to Do More as Britain, France Offer to Take in 44,000 Syrian Refugees