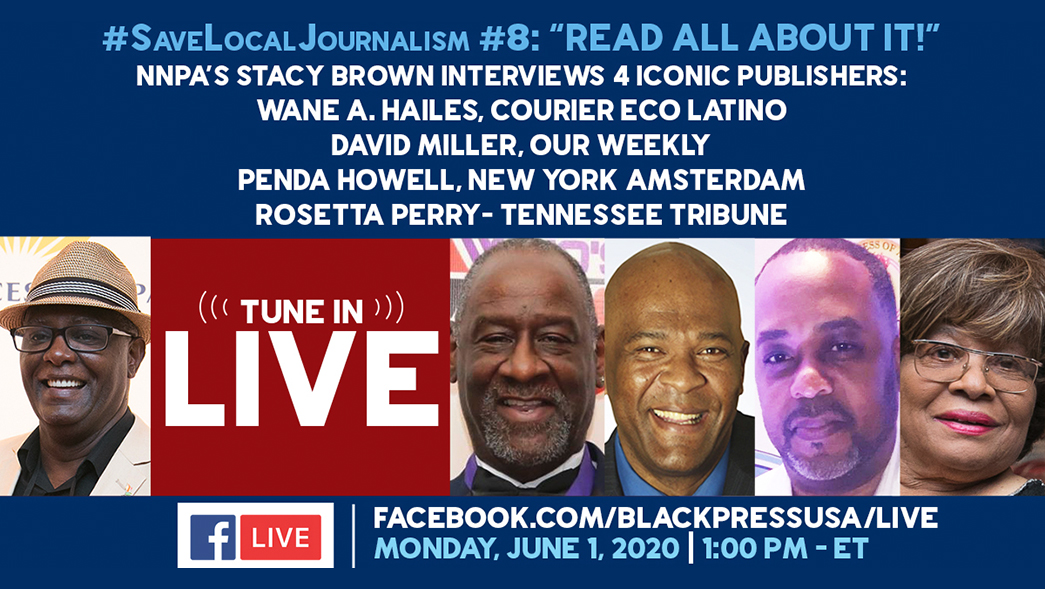 Emotions were on display during a Black Press of America live broadcast that featured owners and managers of five African American-owned newspapers. Sentiments surrounding the killing of George Floyd and the plight of Black people in the United States resonated deeply throughout the group.

“It’s disheartening, to say the least. Frightening, challenging, to witness what’s going on right now,” a tearful Penda Howell of the legendary New York Amsterdam News stated. “I had a problem of coming onto the show. I’m so exhausted and exasperated emotionally behind witnessing a murder online.”

“It was so traumatizing to me as an individual, as a Black man. You almost want to… Your heart and spirit are crying, and just once you want to wrap your arms around someone near and dear and afar. My head wants to hurt something. I can understand the pain because I feel it. You can understand the despair.

“The destruction that’s happening. I understand the pain because I feel it; I can understand despair because I’m experiencing I. the destruction is a manifestation of centuries of Black disenfranchisement in this country. I feel it every day walking out of my house.”

In both an emotional, yet forceful, tone, Bobby Henry of the Westside Gazette in Fort Lauderdale, Fla., admitted he was having difficulty controlling his thoughts.

“I’m really trying to contain and think before I open my mouth. I’m [an older man], and things happening now would have provoked me from a physical standpoint. I am upset,” Henry declared.

“I’m pissed off. However, to understand this, we have to take a deep breath to get a better hold of this. Sometimes we can’t breathe, but we have to look at how we strategize.

“This is not the first time we’ve been subjected to this kind of murder. We don’t have the drum anymore for us to beat that only we understand. To have a man, have another man on the ground with his knees on his throat and when he called for his momma.,” Henry concluded, as his voice trailed off.

“This has been very heartbreaking,” added David Miller of Our Weekly News in Los Angeles.

“This is a different type of protest. I disagree with looting and vandalism, but we have to stand together. I’m proud what’s happening across the country. It’s been crazy out here, but at the end of the day, it’s about standing true to what we believe in,” Miller opined.

Rosetta Perry, the publisher of the Tennessee Tribune in Nashville, also expressed her outrage.