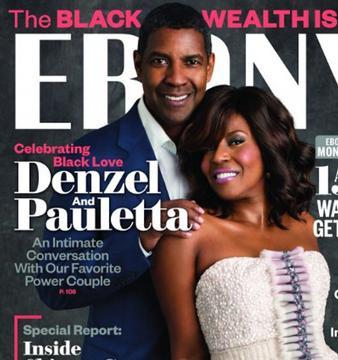 In an industry where love and marriage is as inconstant as the latest box office or Billboard ratings, Denzel and Pauletta Washington have defied the odds.

The power couple graces the cover of Ebony magazine’s August issue. And, in a cover story celebrating Black love, the couple discusses the ingredients for their successful marriage: The Washingtons celebrated their 30th wedding anniversary on June 25.

“There’s no magical mystery to [staying together] … We go through up and downs like any couple,” Denzel told Ebony writer Shirley Henderson, as quoted by the Huffington Post.

But persistence is important, Denzel said, the kind of dogged determination he exhibited when he proposed to Pauletta three times.

“We live in a time — and it’s not for me to judge anyone — when people give up too easy,” the revered actor said.

Pauletta, an actress and producer, said the bond has to go beyond lust and passion. What has proven invaluable for them, she added, is maintaining stability amid the often schizophrenic Hollywood scene.

“I live with this man. I see the down part. I see the sad part. I see every part. He has and knows he has that stability in me as his wife. That’s gives him strength, regardless of if he misuses it. I can’t dwell on that. But I do know that gives him a great platform to go and fly,” she said.

In an interview with Oprah Winfrey published in the January 2008 issue of O magazine, Denzel praised Pauletta for providing that constancy both for him and their four children.

“When it comes to the kids, I give complete credit to my wife, Pauletta. Early on, we decided that we wouldn’t drag them around to all the places I go. Pauletta was the consistent one who made breakfast every day and took them to school. She taught them their prayers,” he told Oprah.

The couple first met at a hotel restaurant during the filming of Wilma, the 1977 television film biography of track legend Wilma Rudolph. It wasn’t love at first sight, however.

“People who say they knew right away are lying,” he said, laughing. “It’s a marathon, not a sprint.”

The chronicle of the Washington marriage comes amid persistent rumors of a breakup, which both marriage partners deny.

The Return of Rebel Rap: Can Hip Hop Still Fight the Power?

Rapper Nas Gets Fellowship in His Name at Harvard