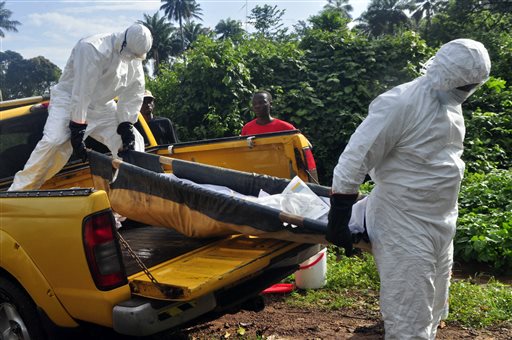 In this Oct. 27, 2014 file photo, health workers unload the lifeless body of a man suspected of contracting the Ebola virus, as they carry him to a grave site on the outskirts of Monrovia, Liberia. (AP Photo/Abbas Dulleh, File)

(HealthDay News) — If the current high rates of monitoring and hospitalization continue, the Ebola epidemic in Liberia could be halted by the middle of this year, researchers report.

After including data collected as of Dec. 1, 2014, a computer model projected that the Ebola infections in Liberia could be largely contained by June, according to the study published Jan. 13 in the journal PLoS Biology.

“That’s a realistic possibility but not a foregone conclusion. What’s needed is to maintain the current level of vigilance and keep pressing forward as hard as we can,” project leader John Drake, an associate professor in the School of Ecology at the University of Georgia, said in a journal news release.

The computer model assessed factors such as the location of Ebola infections and treatment, hospital capacity and safe burial practices.

When Diabetes Treatment Goes Too Far