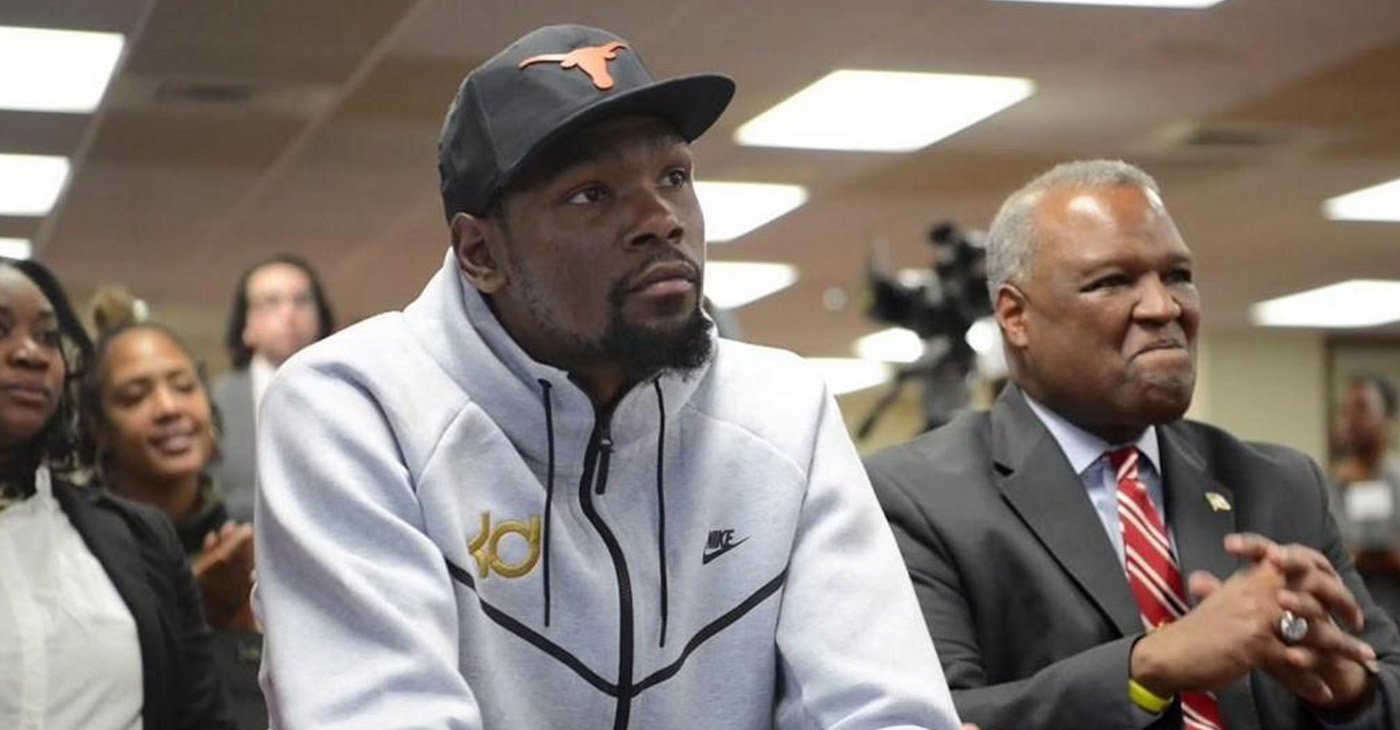 Golden State Warriors all star and two time NBA champion Kevin Durant defies all logic when it comes to the perception of what role he should play on the basketball court.  He is the size of a conventional big man who can be as dominant on the inside then plays like a guard when he steps out on the perimeter using his threat as a scorer to set his teammates up to score with passes that lead to assists.

Durant has become one of the unstoppable forces in the history of the game because his versatility is incomparable.  The Suitland, MD native dances to his own beat so there’s no wonder when he heard a conservative talk show pundit tell Black professional athletes – especially basketball players – to “shut up and dribble” it became a call to action.

His understated philanthropy is an extension of his commitment to giving back to the community throughout his career.  Durant learned at an early age from his mother Wanda that it was important to give back in a clandestine way. Few outside the family’s inner circle know how many organizations such as the Prince George’s County Chamber of Commerce who have benefitted from the silent partnerships that are part of the Durant’s commitment to their community.

The foundation privately funded basketball courts and parks in five cities around the country with little fanfare but Kevin wanted to do more.  He had been looking for new ways for his charity to have a greater impact and wanted to be more than just a sports icon whose impact on society was peripheral.

“I had coaches and teachers that believed I could be something special. That’s where it starts,” Durant told the San Jose Mercury News. “Whether it’s coaches, teachers or guidance counselors. You need someone with more experience who believe in you.”

When he met the people from College Track, he saw this as chance to start a similar program in Maryland. He picked the site of a former political campaign headquarters next to the McDonald’s where his older brother worked when they were teenagers as he worked to pursue his dream.

College Track was founded by Laurene Powell Jobs, widow of Steve Jobs, who was founder and CEO of Apple, Inc. accepts applicants from low-income families and — at the time of Durant’s visit — was interested in expanding. But it hadn’t yet considered a facility on the East Coast, so this opportunity became the perfect assist.

The two-time NBA Finals Most Valuable Player followed in the footsteps of his long time rival LeBron James and his Bay Area contemporary Marshawn Lynch by putting money where his mouth is to establish an education-based programs where they grew up.  On a day where his teammates were scheduled to celebrate their second world championship in three years, Durant cut the tape on the College Track at Durant Center and developed the program for students in Prince George’s County.

Durant’s charity partnered with Prince George’s County Public Schools and College Track, to launch in Suitland. The $10 million commitment over 10 years will offer scholarships, tutoring, counseling and study space to a starting class of 69 students, primarily from low-income families who face similar circumstances to his while trying to gain an education that will change the quality of their lives.

Many basketball fans in the area were disappointed when Durant chose to stay on the west coast instead of signing with the Washington Wizards as a free agent in 2015.  However, this project may not have to come to fruition had it not been for business relationships he built in Silicon Valley.