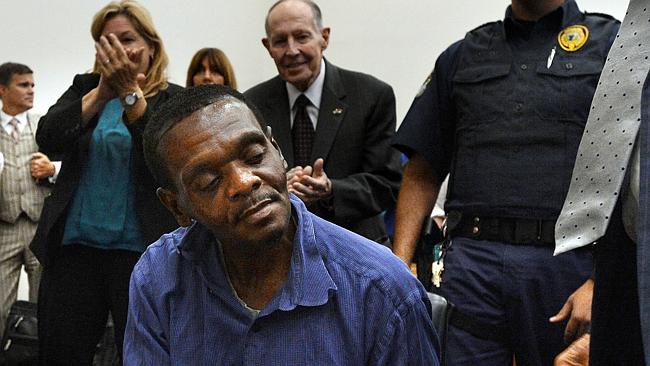 Henry McCollum sits quietly as thunderous applause rings out around him in a Robeson County courtroom. (AP Photo)

LUMBERTON, N.C. (New York Times) — Thirty years after their convictions in the rape and murder of an 11-year-old girl in rural North Carolina, based on confessions that they quickly repudiated and said were coerced, two mentally disabled half brothers were declared innocent and ordered released Tuesday by a judge here.

The case against the men, always weak, fell apart after DNA evidence implicated another man whose possible involvement had been somehow overlooked by the authorities even though he lived only a block from where the victim’s body was found, and he had admitted to committing a similar rape and murder around the same time.

The startling shift in fortunes for the men, Henry Lee McCollum, 50, who has spent three decades on death row, and Leon Brown, 46, who was serving a life sentence, provided one of the most dramatic examples yet of the potential harm from false, coerced confessions and of the power of DNA tests to exonerate the innocent.

As friends and relatives of the two men wept, a Superior Court judge in Robeson County, Douglas B. Sasser, said he was vacating their convictions and Mr. McCollum’s death sentence and ordering their release. The courtroom erupted into a standing ovation.

Family: Man Shot While Handcuffed Did Not Commit Suicide