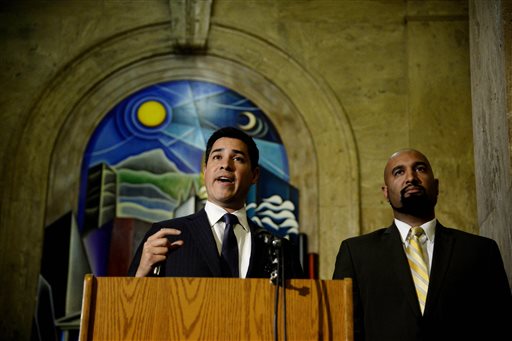 Denver City Attorney Scott Martinez, left, and Qusair Mohamedbhai, representing Jamal Hunter, give a news conference in Denver on Tuesday, July 22, 2014 about a settlement reached by both sides in the amount of $3.25 million. The federal jail-abuse lawsuit was filed by Hunter, a former inmate who said a deputy ignored his screams while a group of fellow inmates brutally beat him and scalded his genitals with hot water. (AP Photo/The Denver Post, AAron Ontiveroz)

DENVER (AP) — Denver officials have reached a deal to pay $3.3 million to settle a federal jail-abuse lawsuit filed by a former inmate who said a deputy ignored his blood-curdling screams while a group of fellow inmates brutally beat him and scalded his genitals with hot water.

The tentative payout is believed to be among the largest in Denver’s history to resolve a civil rights case. Word of a settlement came Tuesday, a day after Denver Sheriff Gary Wilson resigned amid a growing list of misconduct and excessive-force allegations against deputies, who run the city’s jails.

City Attorney Scott Martinez said the settlement, which still requires approval from City Council and a federal judge, was not an admission of liability but offered the best chance to move forward with a series of jail reforms spurred by the lawsuit and other high-profile abuse cases.

“We are committed to addressing the issues at hand,” Martinez said.

The settlement also comes as several cases alleging police brutality have been captured on video, including in New York City, Los Angeles and Pittsburgh.

The allegations in the lawsuit filed by Jamal Hunter were so egregious they prompted a federal judge to request a U.S. Department of Justice investigation into the city’s police and sheriff’s departments. Hunter, a former inmate, said Deputy Gaynel Rumer knew about the July 2011 beating in advance and turned the lights off so surveillance footage would not capture the attack. Hunter has said he was attacked after he was accused of snitching.

The witness, Amos Page, described as a ringleader in the attack, would have testified that Rumer was drunk on the job, allowed jail inmates to beat up other inmates and supplied them with pornography and marijuana, according to court filings.

Martinez also announced Tuesday that a city attorney accused of sending emails to coerce the officers into intimidating Page has been placed on leave while the department investigates his actions.

Hunter’s attorney, Qusair Mohamedbhai, told reporters that his client “feels that his civil rights have been vindicated. He is proud to be an instrument of change.”