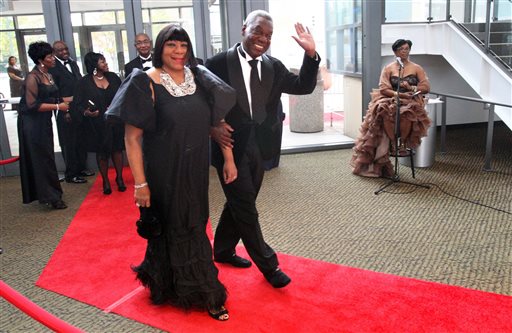 This Nov. 12, 2011, photo shows Adrienne Bailey and her husband Judge D’Army Bailey, civil rights activist and a founder of the National Civil Rights Museum, walk on the red carpet as they arrive with other dignitaries and guests to the 2011 Freedom Awards at the Cannon Center for the Performing Arts in Memphis, Tenn. (Mike Maple/The Commercial Appeal via AP)

MEMPHIS, Tenn. (AP) — D’Army Bailey, a lawyer and judge who helped preserve the Memphis hotel where civil rights leader Martin Luther King Jr. was assassinated and turn it into the National Civil Rights Museum, died on Sunday, his wife said. He was 73.

Adrienne Bailey said her husband died after a long illness, surrounded by family at Methodist Hospital in Memphis.

Bailey led the fight to preserve the crumbling Lorraine Motel, where King was slain while standing on a balcony on April 4, 1968. King had stayed at the hotel while marching and making speeches on behalf of striking sanitation workers who were protesting low wages and unsafe working conditions.

Bailey assembled donors to buy the hotel, which ultimately became the National Civil Rights Museum in 1991. The museum has since undergone an extensive renovation.

Bailey also had small acting roles in several films, including “The People vs. Larry Flynt” and “How Stella Got Her Groove Back.”

“Our community was made better by his years of service, his stunning intellect and a deep appreciation for the rule of law,” Ford said in a statement. “We should all be thankful for his tireless efforts and leadership.”

Bailey received his law degree from Yale and practiced civil rights law in New York before moving to California. He served on the Berkeley, California, city council from 1971 until 1973.

He later returned home to Memphis, where he practiced law before he was elected for a Circuit Court judgeship in 1990.

In 2007, Bailey was a finalist to fill a vacancy on the Tennessee Supreme Court, but he was not appointed by then-Gov. Phil Bredesen. He left the bench to enter private practice in 2009 before being re-elected to a Circuit Court judgeship last year.

He is the author of “The Education of a Black Radical: A Southern Civil Rights Activist’s Journey, 1959-1964” and “Dr. Martin Luther King Jr.’s Final Journey.”

Adrienne Bailey said her husband helped countless people during his life as a public servant.

“D’Army never thought that anything was impossible,” she said.