Dallas Gets Chandler Back in 6-Player Deal with NY
Advertisement 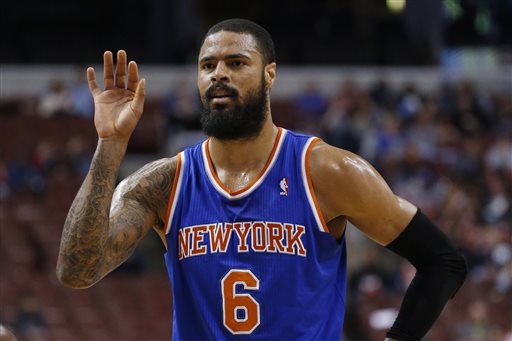 The Dallas Mavericks and the Knicks have agreed to a trade that would bring center Tyson Chandler back to the Mavericks three years after he helped them win a championship only to leave right away in free agency. (AP Photo/Matt Slocum)

DALLAS (AP) — The Mavericks and New York Knicks agreed Wednesday to a six-player trade that returns center Tyson Chandler to Dallas three years after he helped win a championship only to leave right away in free agency.

The Knicks also get both of Dallas’ draft picks Thursday night, a pair of second-round selections at Nos. 34 and 51. New York didn’t have a draft pick before the first major personnel move since Phil Jackson took over as team president.

“The journey to build this team for the upcoming season and beyond continues,” Jackson said. “We have added players with this move that will fit right in to our system while maintaining future flexibility.”

New York is hoping to keep Carmelo Anthony despite the star forward planning to opt out of his contract and become a free agent on July 1. The Mavericks are reportedly on a short list of new destinations Anthony will also consider.

Chandler was the emotional catalyst for the Dirk Nowitzki-led Mavericks when they beat the Miami Heat in six games to win the franchise’s first title in 2011.

Mavericks owner Mark Cuban made the much-debated decision not to offer him a long-term contract because of concerns over how the new labor deal would keep Dallas from making other moves. Chandler, who had a history of injuries, turned down a one-year deal worth about $20 million for the security of a four-year, $55 million contract with the Knicks.

The 31-year-old Chandler is going into the final season of that deal at $14.5 million, and Felton has one year at $3.8 million with a player option for another season in the same range.

Calderon just finished the first season of a four-year, $28 million contract with the Mavericks, who also signed Monta Ellis to a multiyear deal last summer. It was the first time Dallas had committed to any player beyond one year since Nowitzki signed his most recent extension in 2010.

Nowitzki will join Anthony in free agency, but he is expected to re-sign with the Mavericks.

The Knicks are getting one of the best 3-pointer shooters and a steady hand at the point in Calderon, but he sometimes sat late in close games because he was a defensive liability. He averaged 11.4 points and shot 45 percent from 3-point range last season.

Felton is coming off a trouble-plagued season that included his arrest in February in a felony gun possession case. He was expected to plead guilty in exchange for community service and a $5,000 fine.

Felton, who turns 30 on Thursday, averaged a career-low 9.7 points and saw a significant drop in his shooting percentage last season.

Dalembert had an up-and-down season in the first year of a two-year deal with Dallas, while Larkin and Ellington were used sparingly.

Larkin, the son of Hall of Fame shortstop Barry Larkin and a first-round pick a year ago, saw his playing time drop dramatically when Devin Harris returned from toe surgery at midseason.

Harris is a free agent and wants to return to Dallas, but he would like the three-year contract he and the Mavericks agreed to last year before the toe injury scuttled the deal. He settled for a one-year contract.

US Ready to Take on Belgium in World Cup