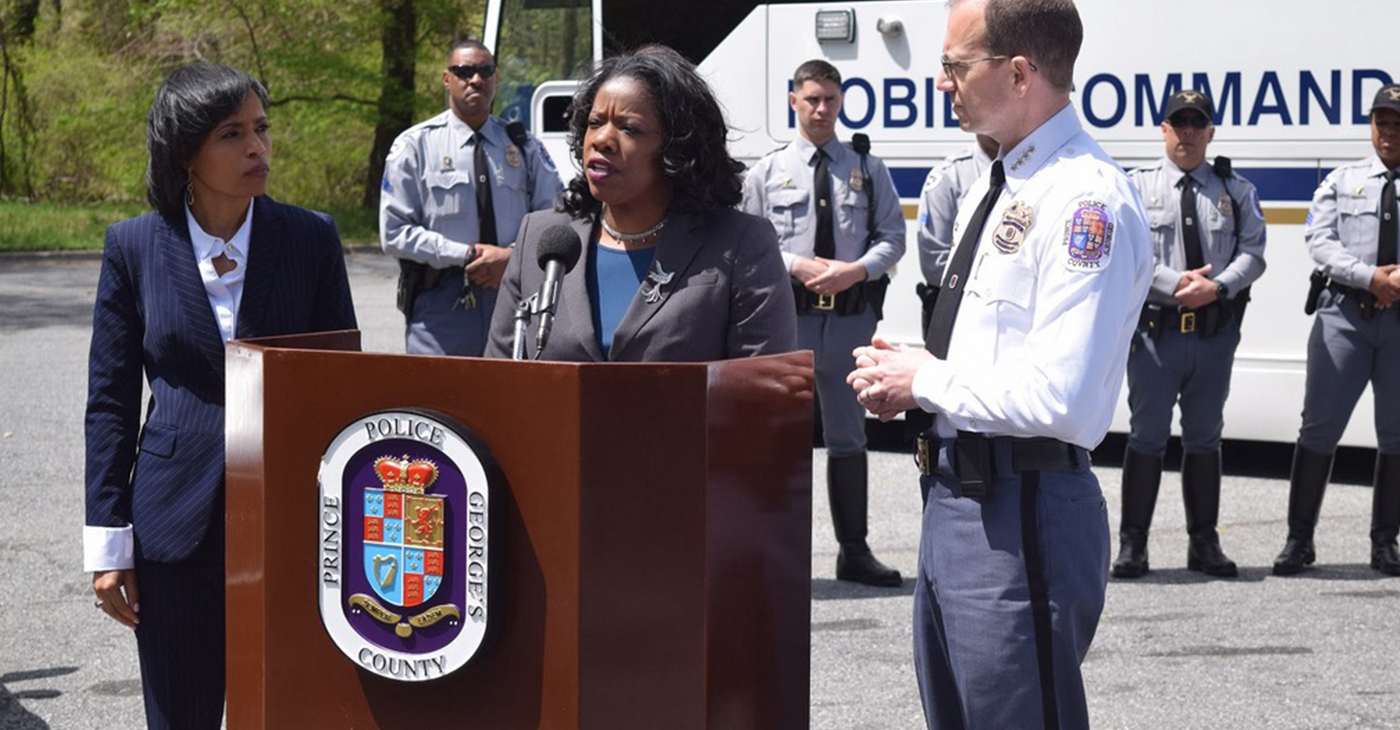 Prince George’s County’s top three law enforcers spent part of tax day in “a driveby” to save lives.  County Executive Angela Alsobrooks, State’s Attorney Aisha Braveboy and Police Chief Hank Stawinski drove through neighborhoods and on major thoroughfares and began trying to change the mindset of motorists to avoid distractions when behind the wheel that have been fatal during the first quarter of 2019.

Alsobrooks and Stawinski spent Monday morning cruising through the County and stopping vehicles whose operators were violating basic driving safety laws spreading the message of non-distracted driving.  The County Executive feels by reinforcing Maryland’s hands free laws, that require drivers not to text, program GPS coordinates or use their mobile with their hands while driving, will reduce the amount traffic related fatalities which are plaguing the area.

“Consistent messaging does change behavior,” Alsobrooks said to the AFRO. “We’re going back to reaffirming what driver safety is. We expect to see a change in behavior over time.”

Alsobrooks and Stawinski have seen the practice of consistent messaging work in reducing the amount of major crimes throughout Prince George’s County, such as their work towards domestic violence when the County Executive was State’s Attorney. Alsobrooks notes there was a 20 percent reduction in domestic violence cases in 2018 through greater community awareness and understanding how to report incidents. Their hope is for heightened awareness strategies will have the effect on driver safety.

“We’re clearly committed to reducing the number of fatalities on our roads,” Stawinski said. “We’re seeing the kind of progress we need to see but we’re asking the community to do more.”

Their plans, which both acknowledge will take some time to achieve the desired impact, are still a work in progress as the county grows. Commercial and residential redevelopment continue to bring more drivers into the County adding to traffic congestion and more distracted drivers on the roads. Despite the tragic start of the year, especially in southern Maryland on I-210 between Oxon Hill and Acockeek, 2018 marked the significant drop in the number of driving fatalities since 2014.

Five years ago when the proliferation of speed cameras and checkpoints began on Indian Head Highway, there were 69 driver related deaths compared to 54 homicides. Each year since there has been a steady decline. Last year there were 49 traffic fatalities.

“This community is rapidly evolving and this department is evolving to meet their needs,” Stawinski said. “The number of fatal collisions have reduced year after year.”

While educating drivers remains paramount, Prince George’s leaders remain committed to enforcing the traffic laws already on the books. Drivers who are distracted will feel the wrath of law enforcement authorities who have been empowered to write more tickets for drivers who text or have their hands full while driving.

The generation of new drivers who are addicted to their mobile devices are being urged to remember that texting and social media updates while being behind the wheel can lead to criminal charges or much worse.

“It doesn’t matter what age,” Alsobrooks said. “Drivers have to remain focused on the road.”

Braveboy promises to fully prosecute those who are driving impaired and cause a fatal accident.

“There is nothing worse than someone who is not wearing a seatbelt and involved in a collision,” Braveboy said. “Limbs can be severed or lead to something even worse. It can be heartbreaking for families when they can’t leave the casket open during the funeral.”

COMMENTARY: Reparations NOW! Are Blacks Close to Finally Getting Their “40 Acres and a Mule”?