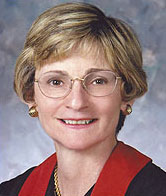 Supreme Court Chief Justice John Roberts on Wednesday took the rare step of ordering a review of a powerful federal judge accused of making denigrating statements against minorities and people with mental disabilities.

Roberts formally ordered the District of Columbia circuit court to review the complaints against Judge Edith Jones of Houston, who sits on the Fifth Circuit U.S. Court of Appeals.

The complaint, filed by a group of civil rights organizations, legal ethics experts, and law professors, alleges that Jones made a number of inappropriate remarks at a Feb. 20 speech the University of Pennsylvania School of Law. Her remarks were not recorded at all, but according to Texas Civil Rights Project, she called certain racial groups like African-Americans and Hispanics “predisposed to crime” and called defendants’ claims of racism nothing more than “red herrings.”

Jones also allegedly made a number of inappropriate remarks about capital punishment, such as that Mexican nationals would prefer to be on death row in the U.S. than in a Mexican prison and that the death sentence is beneficial for defendants because they are more likely to make peace with God before their execution. She also allegedly expressed skepticism about defendants who claim to be mentally retarded.

Is Duane Buck Facing Execution in Texas Because as a Black Man, He is Likely More Dangerous?