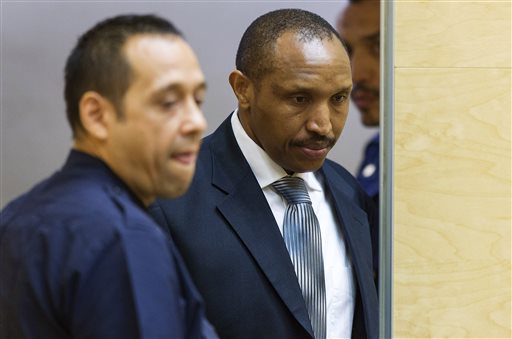 Bosco Ntaganda, center right, a Congo militia leader known as The Terminator, enters the court room for the start of his trial at the International Criminal Court on charges including murder, rape and sexual slavery allegedly committed in the eastern Ituri region of Congo from 2002-2003, in The Hague, Netherlands, Wednesday, Sept. 2, 2015. (Michael Kooren/Pool Photo via AP)

THE HAGUE, Netherlands (AP) — Prosecutors on Wednesday accused a Congo militia leader known as “The Terminator” of overseeing brutal atrocities including the slaughter of dozens of unarmed villagers and a campaign of rape and sexual enslavement of women and girls — many of them in the ranks of his own forces — as his trial started at the International Criminal Court.

Bosco Ntaganda pleaded not guilty to 18 charges, including murder, rape and sexual slavery, and then sat passively listening to prosecutors lay out their case.

First indicted under seal in 2006, Ntaganda was for years a symbol of impunity in Africa, once even serving as a high-ranking officer in Congo’s army, before turning himself in in 2013 as his powerbase crumbled.

The court’s chief prosecutor, Fatou Bensouda, called him a “notorious and powerful” military leader who commanded troops who slaughtered hundreds of civilians in the resource-rich Ituri region of eastern Congo in 2002 and 2003.

His trial will highlight not only the brutal murders of civilians, but also the rape and sexual enslavement of young girls and recruitment of child soldiers in a lawless conflict that became known for such atrocities.

“Rape of these young girls was so common that soldiers sang songs about it,” prosecution lawyer Nicole Samson told the three-judge panel.

The trial also will also likely shine a light on widespread plundering of gold and minerals by rebels in Congo. Bensouda said Ntaganda exploited the region’s brutal ethnic conflict to enrich himself.

Bensouda told judges that one of her witnesses had to pick through scores of bodies in a field of banana trees to find the bodies of his wife and four children, allegedly killed by Ntaganda’s troops in the armed wing of the Union of Congolese Patriots.

When he found their bodies, they all had their throats slit and other horrific injuries.

Defense attorney Stephane Bourgon said Ntaganda would make a brief statement to judges on Thursday. The first witness is due to be called on Sept. 15.

Africa’s Deadwood: The Gold Rush is On in Uganda