COMMENTARY: Time’s Up for Clarence Thomas Being on the Supreme Court
Advertisement 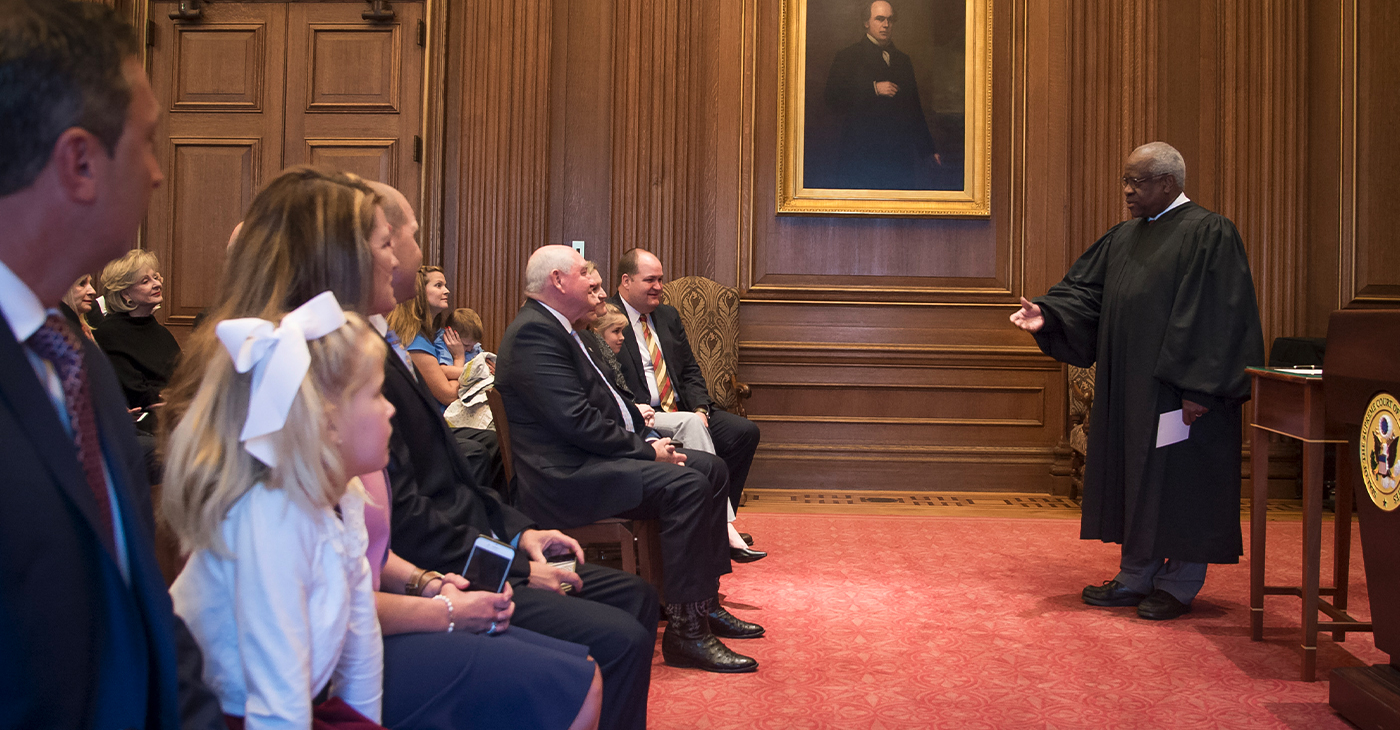 U.S. Supreme Court Justice Clarence Thomas shares some words before swearing in Sonny Perdue as the 31st Secretary of Agriculture April 25, 2017, at the Supreme Court in Washington, D.C.. Photo by Preston Keres

By Donald M. Suggs | The AFRO

Clarence Thomas has been a controversial figure since day one — and it’s time for him to step down from the United States Supreme Court.

From the allegations of sexual harassment by Anita Hill and his ethically questionable behavior and connections with his politically active wife, to his commitment to upholding laws that do harm to the Black community, Thomas’ name has long been synonymous with controversy.

It began after his nomination in July 1991 to the Supreme Court by President George H.W. Bush. Thomas was selected to replace retiring civil rights icon, and the court’s first African American justice, Thurgood Marshall. Who can forget the contentious confirmation hearing — and Anita Hill’s testimony about alleged sexual harassment — that immediately followed?

The controversy also stems from his inexplicable, confusing, and contrarian views on race in America. From his early years to his overall performance during his 30-year tenure on the court, his rulings have justifiably earned strong disdain, even loathing among most Black Americans, as well as many Hispanics and women.

The calculation of Republicans at the time, to place a young, reliably conservative Black person in the so-called ‘Black Seat’ that was held by liberal justice Thurgood Marshall, for more than 30 years, has proven to exceed the right’s wildest expectations. Thomas (only 43 when he came to the court) has repeatedly supported policies that have helped maintain the status of disenfranchised minority communities.

Thomas’ ascendancy to the court has created particularly disastrous consequences for Black America’s aspiration to move forward in American society. His response to criticism, while not unexpected based on his history, still shows an almost pugnacious and unyielding indifference to the plight of Black people in the United States — a condition that has plagued them since the nation’s founding.

Now, he is joined on the Supreme Court by Judge Ketanji Brown Jackson, a proud Black woman, who was confirmed by the Senate despite a wild and disingenuous smear campaign against her by some Republican senators on the Judicial Committee. She is expected to offer a sharp contrast to Thomas’ servile obedience to far right-wing Republican ideology and its racist political dogmas.

Remember, Thomas had succeeded a judicial giant on the court, someone who championed equal justice for all under the law during his long years as a Supreme Court Justice. Marshall was even eulogized by conservative Chief Justice William Rehnquist, who wrote, “inscribed above the front entrance of this court building are the words ‘equal justice under the law.’ Surely no individual did more to make these words a reality than Thurgood Marshall.”

The Senate confirmed civil rights litigator Thurgood Marshall as the first African American to serve on the Supreme Court on August 30, 1967, following his nomination by President Lyndon B. Johnson. He had led the NAACP legal team that in 1954 won Brown vs. Board of Education, a historic landmark decision that invalidated the concept of segregated public schools under the 14th Amendment — a constitutional amendment that had been enacted in 1868 after the Civil War, almost exactly a century before.

A majority on the Senate Democratic-controlled Judiciary Committee, in a rebuff to the dissenting Southern Senators on the panel, sent their majority approval to the full Senate. They reported that nominee Marshall, “demonstrated those qualities we admire in members of our highest judicial tribunal…along with a balanced approach to controversial and complicated national problems.”

In contrast to Clarence Thomas, Judge Jackson embraces her role as a Black person. She proudly and unequivocally said, “It has taken 232 years and 115 prior appointments for a Black woman to be selected to serve on the Supreme Court of the United States, but we’ve made it. We made it — all of us.”

Reflecting on the continuing travail of many Black people in the country since they were brought to the U.S. as slaves — but still holding a belief in our drive to continue forward — she quoted poet Maya Angelou: “I am the dream and hope of the future.”

The actions of right-wing racists — despite their praise, even adulation — show what they really think about Clarence Thomas and the millions of Americans who look like him. They consider him and his fellow Black Republican Tim Scott, the U.S. Senator from South Carolina, exploitable, as “useful idiots.”

Even Thomas, 73, must be concerned about the inevitable future comparison between him, his intellect, his integrity in the past on the bench, and his verbal ability compared to this brilliant, unequivocally Black woman, Ketanji Brown Jackson, only 51.

More recently, we have seen some different challenges created by recent revelations about the role of his wife Ginni Thomas, a conservative activist and Thomas himself.

According to dozens of messages to Donald Trump’s Chief of Staff Mark Meadows, Ginni Thom

Tim as worked tirelessly after the presidential election in 2020 to overturn the thoroughly vetted defeat of Trump (who has still not conceded). Moreover, the couple has long had questions raised about Thomas’ ethics in cases in the past where she has been an active advocate. He has continued to refuse to answer those questions appropriately.

A report in the New York Times Magazine in March 2022 said that they have appeared for years together at highly political events hosted by advocates hoping to sway the court. While it is possible that married people can have independent views and careers, the Thomases have gone way beyond what is considered ethically proper behavior, particularly because they brag about how they are fused “into one being” in their marriage and their politics.

Although Thomas is protected from a code of judicial ethics as a Supreme Court justice — a code that applies to all other federal judges — he continues to use that special dispensation to ignore any sense of duty to avoid what Justice Sonia Sotomayor called the “stink” of partisanship.

This adds weight to calls for him to leave the court to make room for someone who accepts their responsibility to protect the highest court in the country’s credibility and reputation. In the difference to the two other branches of the federal government, the Supreme Court depends largely on public trust to maintain its influence and authority. Thomas has repeatedly betrayed that trust and therefore undermined the democracy and freedom he claims to revere.

In conclusion, let’s turn to the last words back in the 16th century of William Shakespeare, “Live in thy shame, but die not shame with thee.”

Donald M. Suggs is the publisher and owner of The St. Louis American.