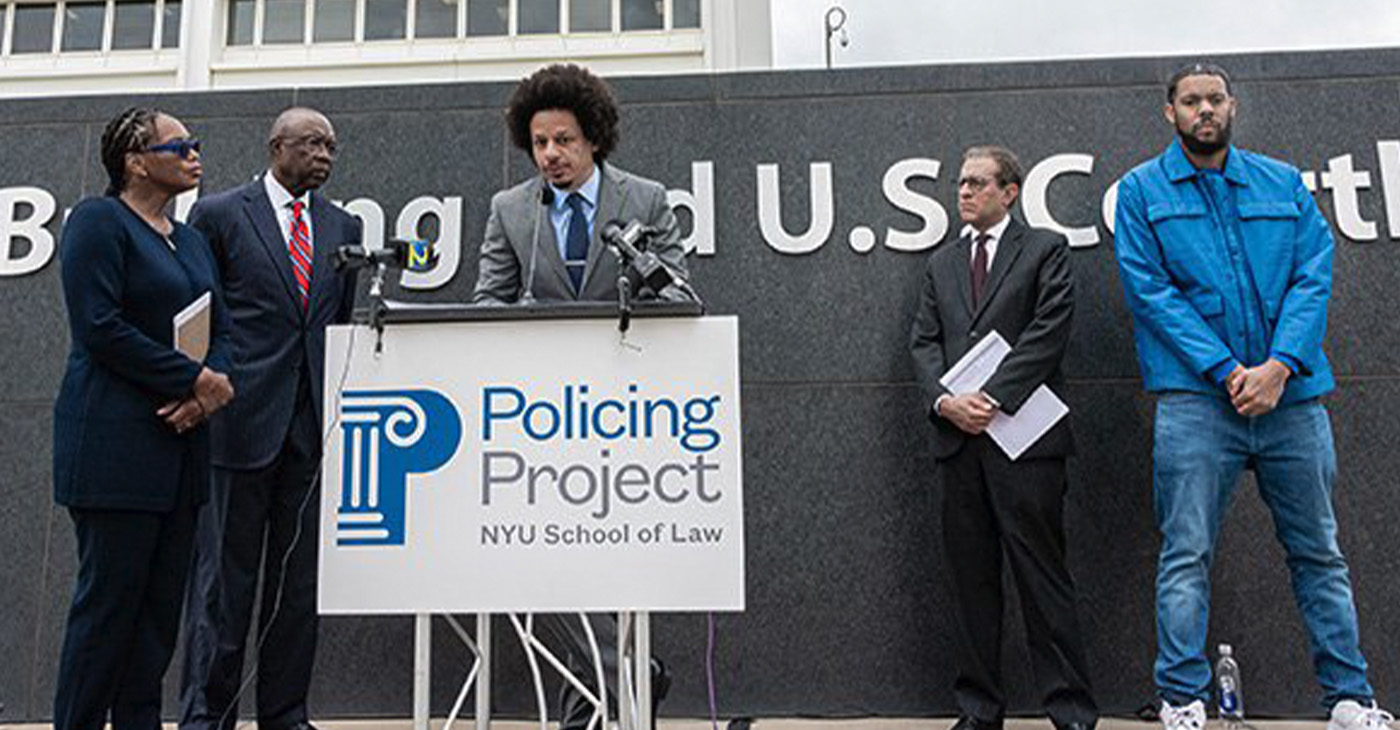 Actors and comedians Eric André and Clayton English filed a lawsuit today against Clayton County for its police department’s program of racial profiling and coercive stops in jet bridges at Hartfield-Jackson International Airport (ATL). The lawsuit challenges the constitutionality of these stops under the Fourth and 14th Amendments. The Policing Project at NYU School of Law and pro bono counsel from the law firms of Jones Day and Lawrence & Bundy represent André and English.

André and English, both Black men, were profiled and illegally stopped in nearly identical situations several months apart. On April 21, 2021, André was traveling from Atlanta to Los Angeles. As he walked through the jet bridge to board the plane, two Clayton County police officers intercepted him and immediately asked if he was carrying illegal drugs. After approximately five minutes of questioning and reviewing André’s ticket and ID—during which other passengers squeezed by and gawked at the scene—the officers allowed him to board his flight. Clayton English, a stand-up comedian and actor based in Atlanta, had a very similar experience traveling from Atlanta to Los Angeles on October 30, 2020. The Clayton County Police Department (“CCPD”) has defended these coercive jet bridge stops as “consensual encounters” and tell those who are stopped that they were selected at “random.”

“I was blocked in a jet bridge by two police officers who interrogated me about drugs,” said André. “I didn’t see any other Black people boarding at the time. It’s hard to believe I was selected at ‘random’ for questioning. It was a humiliating and degrading experience.”

As today’s lawsuit explains, the inherently coercive nature of these stops violate the Fourth Amendment. From the legal filing: “By ambushing passengers in this manner, the Unit’s officers compound the enormous, preexisting compulsion to cooperate with airport law enforcement by exploiting the passengers’ fear they will create an untoward scene or will appear guilty, subversive, or dangerous to their fellow passengers. By design, all of these factors exert tremendous coercive pressure on an individual passenger on the jet bridge to acquiesce to the officers’ wishes. Those pressures are even greater for persons of color, given the history of racial profiling by airport security officers.”

In addition, data obtained through an Open Records Act request filed by the Policing Project reveals that in the eight months preceding André’s stop, 56% of the hundreds of passengers stopped by CCPD in ATL jet bridges whose races were recorded were Black. But overall, only 8% of airline passengers in the U.S. are Black, making the odds that Black travelers were “randomly” selected for these stops less than one in 100 trillion.

“These are cases of flying while Black, plain and simple,” said Barry Friedman, co-founder of the Policing Project at NYU School of Law and the Jacob D. Fuchsberg Professor of Law. “Every day in America, people of color are unjustly stopped on the pretense that these encounters are consensual. It is humiliating, it is deeply inappropriate, it is unconstitutional, and it must stop.”

The open records request also revealed that these jet bridge stops are ineffective at confiscating drugs or arresting drug smugglers. The stop program is, however, an effective civil asset forfeiture operation, in which money is seized from travelers based on the slightest suspicion that the funds are connected to criminal activity. In the eight months preceding André’s stop, CCPD made 402 stops; only two resulted in charges (of a passenger traveling with 10 grams of marijuana and mushrooms and another with six prescription pills for which no valid prescription allegedly existed). However, in that same period, officers seized close to $1 million in cash and money orders from passengers against whom no related charges were ever filed.

“Neither Georgia residents nor travelers are safer because of these unlawful, discriminatory stops,” said Richard Deane, Of Counsel at Jones Day and former U.S. Attorney for the Northern District of Georgia. “What CCPD appears to have created is a cash-grab scheme operated out of the busiest airport in the world.”

“No matter where you’ve come from or where you’re going, everyone has the right to be free of discrimination and harassment by Clayton County law enforcement,” said Allegra Lawrence-Hardy, Co-Founder, Lawrence & Bundy. “We urge the court to shut down CCPD’s airport stop program immediately.”

André and English are asking the federal court to declare the CCPD’s jet bridge stop program at the Atlanta airport unconstitutional. The suit was filed in the U.S. District Court for the Northern District of Georgia.