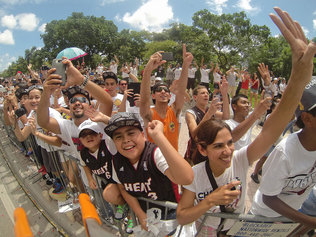 Tens of thousands of fans celebrated the second straight Miami Heat championship parade outside the AmericanAirlines Arena. Inside, the team partied as well, and talked about making history.

After a franchise-record 66 wins, a 27-game winning streak, and a second straight championship, the Miami Heat wrapped up a historic season Monday inside the American Airlines Arena.

Outside, tens of thousands of fans celebrated.

“We feel like Miami parties better than any city in the world,” said Heat coach Erik Spoelstra.

And inside, the team talked about family, hard work, and history.

After year away, Bird returns to Pacers as president