Central Park Five Get Money, but No Apology
Advertisement 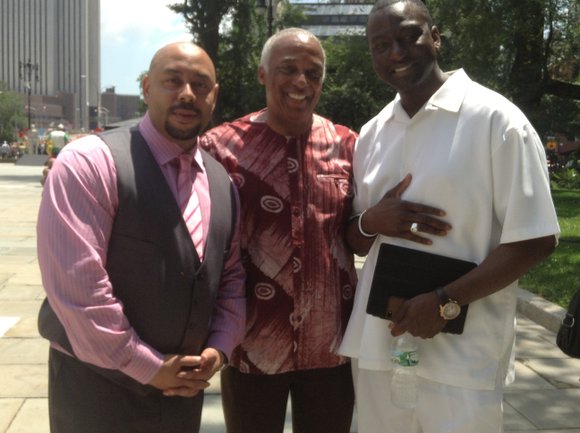 “It is all overwhelming and bitter sweet,” Yusef Salaam told the Amsterdam News.

The men known as the Central Park Five will now get their $41 million from the city for their wrongful convictions. Mayor Michael Bloomberg seemed determined that the boys-to-men, wrongfully convicted and then exonerated, would get no compensation under his watch.

Friday, Sept. 5, 2014, Magistrate Judge Ronald Ellis decided to bring some closure to the men’s 25-year ordeal. He approved the $41 million settlement of the claim brought against the city in 2003 for the wrongful convictions in the outrageous “Central Park Jogger” case that rocked New York in 1989 that resulted in a nationwide call for compensation.

Of this ultimate justice-delayed case, Salaam said, “As you can imagine, we are all still trying to process what I call a sort of victory. I’m glad the battle is over, but I know the damage done isn’t covered by the amount we were awarded. No amount can replace the loss of freedom, justice and equality. I am concerned about the future of our community because we are far too often the ones at the end of the stake, roasted over the coals to satisfy the sadistic nature of the sick presence of institutionalized racism. I am afraid for the future of our community because if we are always seen as the culprit, the real criminals prevail.”

The lawyers for the five men, Michael Tarif Warren, Roger Wareham and Jonathan Moore, all maintained that although the settlement is a significant amount of money, “no amount of money can make up for the pain and suffering these men and their families have had to endure over the past 25 years.”

In a racially toxic atmosphere—Donald Trump took out full page ads in the New York press calling for the death penalty—the five then teenagers were convicted in 1990 of rape in the “Central Park Jogger” case; where Trisha Meili was raped and beaten.

In 2002, while in prison, Wise happened to bump into convicted rapist Matias Reyes, who confessed to the crime. That encounter had a snowball effect. An investigation ensued. Reyes’ DNA matched evidence from the victim. There were court dates and more protests. And despite the corroborating evidence supporting Reyes claim, Bloomberg and then police commissioner Ray Kelly insisted that the five wrongfully convicted young men must have been involved in some way. Then, Manhattan District Attoney Robert M. Morgenthau recommended that a judge vacate the convictions.

As the vociferous supporters of the Central Park Five continued their demands for justice, mayoral candidate Bill de Blasio stated that if elected, he would settle the case.

Friday, Sept. 5, de Blasio said in a statement, “This settlement is an act of justice for those five men that is long overdue. We can finally put this case behind us, and these five men and their families can begin to heal these wounds and move forward.”

Police Say Black Male Shot Himself in Back While Handcuffed, Parents Demand Answers