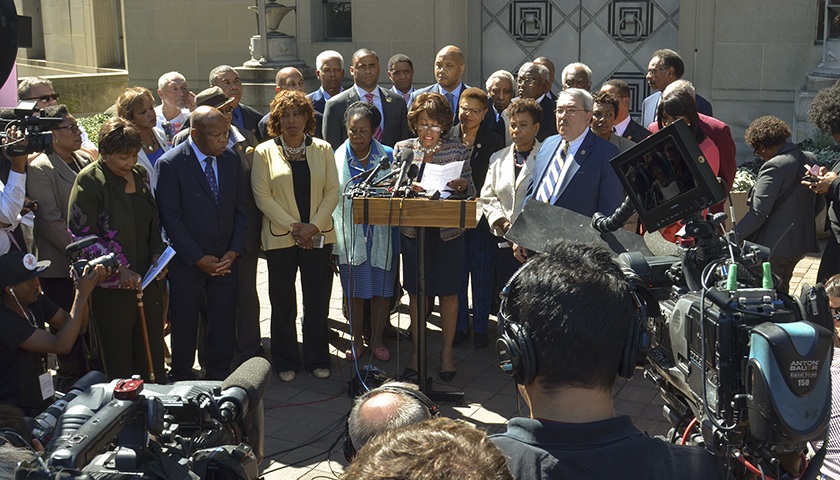 On Thursday, the Congressional Black Caucus (CBC) held a news conference outside of the United States Justice Department in Washington D.C., calling for Attorney General Loretta Lynch to investigate, indict and even prosecute law enforcement officers, who intentionally kill innocent and unarmed Blacks.

Rep. Maxine Waters (D-Calif.) recited the names of Blacks who have been killed by police in recent years including Rekia Boyd, Eric Garner, Alton Sterling, Philando Castile and Terence Crutcher. Waters also read from a letter that she and Rep. G. K. Butterfield (D-N.C.) delivered to Lynch’s office minutes later.

“It is time for the Department of Justice to take aggressive action and put an end to what appears to be the targeting of and profiling of African Americans that result in their death,” Waters said while reading the nearly two-page letter. “Officers enjoy the presumption of credibility, whereas victims endure the presumption of guilty. For too long, this dynamic has helped to protect law enforcement officers from being brought to justice.”

Several members of the CBC stood at the podium and passionately spoke about how recent killings continue to hurt the Black community.

For the past two days in Charlotte, people protested the death of Keith Lamont Scott, 43, who was shot and killed by a Black police officer after they sought to serve a warrant to another person at an apartment complex. Police said in various news reports that Scott brandished a gun, but family members on the scene insisted that he was sitting in his car reading a book, before the shooting.

North Carolina Governor Pat McCrory declared a state of emergency Wednesday and then called in the National Guard after violence erupted in parts of the city that led to more than 40 arrests.

Rep. Keith Ellison (D-Minnesota) advised all those protesting nationwide to conduct themselves in a peaceful manner.

“Exercise your right within the First Amendment,” he said. “I understand why you’re angry. I’m angry. Just stay peaceful…”

Scott was the third Black male shot and killed by police in the span of a week.

Tyre King, 13, was shot and killed by a White police officer September 15 in Columbus, Ohio. Police said Tyre, who later died at a local hospital, allegedly pulled a BB gun from his waistband, before he was shot. During a press conference, Columbus Police Chief Kim Jacobs said that, “Our officers carry a gun that looks practically identical to this weapon.”

A White police officer shot and killed Terence Crutcher, 40, in Tulsa, Okla. The shooting was caught on video from a police helicopter.

“The charging of the officer in Tulsa was a swift step in the pursuit of justice,” the Rev. Al Sharpton tweeted on Thursday. “We need to examine all involved.”

William J. Ford is a staff writer for The Washington Informer. You can follow him on Twitter @jabariwill.

The Washington Informer is a member publication of the National Newspaper Publishers Association. Learn more about becoming a member at http://www.nnpa.org.

After Recent Police Shootings, NNPA Declares a State of Emergency in the Black Community