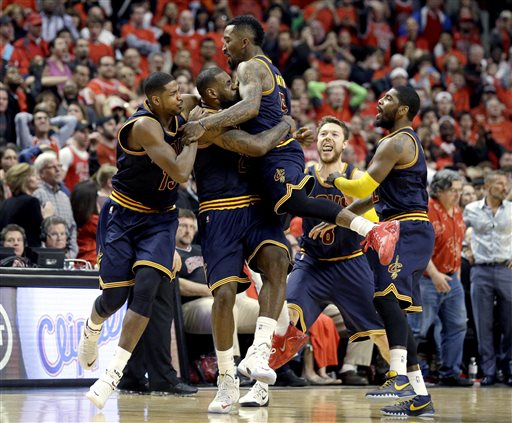 Cleveland Cavaliers’ LeBron James, second from left, celebrates with Tristan Thompson, left, J.R. Smith, center, Matthew Dellavedova, and Kyrie Irving, right, after scoring the game-winning basket during the second half of Game 4 in a second-round NBA basketball playoff series against the Chicago Bulls in Chicago on Sunday, May 10, 2015. The Cavaliers won 86-84. (AP Photo/Nam Y. Huh)

And now this Chicago-Cleveland series is going to get really intense.

Game 5’s have arrived in the second round of the NBA playoffs, with the Bulls visiting the Cavaliers in their knotted-up series to start tonight’s doubleheader. The nightcap features the Los Angeles Clippers — a franchise that has never won two playoff series in the same year — looking to change that and advance, as they take a 3-1 lead into Houston.

“This is the ultimate adversity right now,” Houston guard James Harden said. “We’ve got Game 5 back at the house and it’s really win or go home. Our backs are against the ball, and we’ve got to show up.”

It only seems that way for the Bulls and Cavaliers.

Here’s a look at tonight’s games, all times Eastern:

There’s been more injuries than buzzer beaters in this series, which actually says a lot.

Cavs guard Kyrie Irving has injuries to both legs now, LeBron James is getting treatment on a twisted ankle and the Bulls sound very concerned about forward Pau Gasol’s availability for Game 5 as he tries to overcome the hamstring strain that kept him out of Sunday’s lineup.

“We’re 2-2, we’re back on our home floor, that doesn’t guarantee us nothing,” James said Monday, back home in Cleveland. “But we went up there, we gained back home court, which we wanted to do.”

He’s swearing off replays of highlights, but said he repeatedly watched the play where he turned the ankle in Game 4. It’s achy enough that he needs treatment but isn’t bad enough to keep sideline him.

Then again, James still has one good leg. Irving apparently doesn’t. He’s dealing with a bad foot on one side, knee tendinitis now flaring up on the other.

“It’s just about finding ways to be more effective, especially being out there,” Irving said. “I still can shoot. You still have to respect me out there. It’s not like they can just leave me or anything like that. But I just try to use myself as a decoy and make plays as best I can.”

The Bulls didn’t practice Monday, other than some shooting that didn’t include Gasol.

They’ve already won once in Cleveland in this series, so confidence shouldn’t be lacking. And Derrick Rose has been great, particularly in the last two games — winning Game 3 with a banked-in prayer at the buzzer, then a 31-point effort in Game 4.

But all anyone remembers from Sunday is James capping a 10-for-30 shooting performance with a corner jumper to win Game 4 and knot the series on a play that he called. Cavaliers coach David Blatt wanted James to be the passer, not the shooter.

The Bulls probably wanted that as well.

“We’re disappointed that we lost the game,” Chicago forward Joakim Noah said. “We had our opportunities. LeBron hit a great shot at the end of the game. But we’re right where we want to be and we’re really excited for Game 5.”

Modest as this sounds, it’s still significant: The Clippers have already tied a franchise single-season record with seven playoff wins, set in 2006.

If that gets the blood of super-excitable Clippers owner Steve Ballmer pumping a bit more than usual, just imagine what his celebration after the next win could be like.

The Clippers — doormats no more — have three chances to reach the Western Conference Finals. The first crack at reaching the NBA’s Final Four comes Tuesday in Houston, against a Rockets team that looks to be reeling after losing the last two games in Los Angeles by a combined 58 points.

“It’s an accomplishment, but it’s not like our goal,” Clippers forward Blake Griffin said, asked to address what a West finals appearance would mean. “I mean, it is a goal on the way to the bigger goal, the biggest goal.”

Before this past weekend, the Rockets had endured only three blowouts by 25 or more points all season. Then — in the biggest games of their season no less — they got drubbed at Staples Center by 25 and 33 points in a span of about 48 hours.

And while so much of the attention has been on the Hack-a-Somebody scheme that sent DeAndre Jordan to the foul line 28 times in the first half alone in Game 4, the much bigger story is that the Rockets are in major trouble. They need three straight wins over a Clippers team that had one such slide all season — a four-game losing streak in February.

“Now the only thing to do is just go out there and battle,” Rockets coach Kevin McHale said. “We’ve got to win a game at home on Tuesday, and then go from there.”

Tom Brady’s Punishment Is a Matter of Perspective