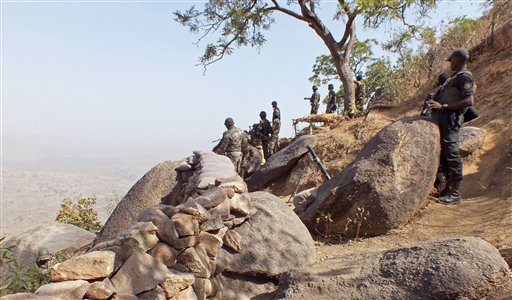 In this photo taken on Thursday, Feb. 19, 2015, Cameroon soldiers stand guard at a lookout post as they take part in operations against the Islamic extremist group Boko Haram near the village of Mabass, Cameroon. (AP Photo/Edwin Kindzeka Moki)

Others in the region should follow suit in the face of a seemingly constant onslaught of attacks from the Nigeria-based extremists, said Far North Region Governor Midjiyawa Bakari.

“We are calling on the population to constitute themselves in vigilante groups and be each other’s keeper as Boko Haram lives its last days,” Bakari said.

Northern Cameroon borders Nigeria and has been targeted repeatedly by Boko Haram, including seven attacks in the past five days.

On Sunday, suicide bombers hit the town of Kolofata, killing nine civilians and wounding at least 18. But they were prevented from causing further bloodshed when members of a self-defense group in the town blocked them from heading to the market, said Ahmidou Fouman, one of the group’s members.

“We detected three strange teenage boys and a girl dressed like a Muslim in our town. They pretended to be fetching water from a stream and when some members of our group went to search them, the girl detonated a bomb killing some of us,” Fouman said.

Bakari, the governor, said many more people would have died without the group’s intervention. “I am congratulating the vigilante committee whose courage reduced the shock of the Boko Haram attack and I am inviting everyone to emulate their example,” he said.

In addition to the suicide bombing, suspected Boko Haram militants have looted property and cattle and burned homes in the border region in recent days.

Cameroon is one of five countries contributing troops to a regional force intended to wipe out Boko Haram, which became an affiliate of the Islamic State group earlier this year.