Buy a Mere Ticket? How Quaint. Be a Team 'Member'
Advertisement 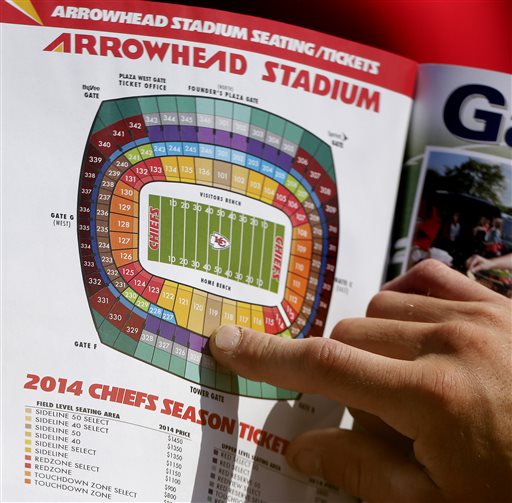 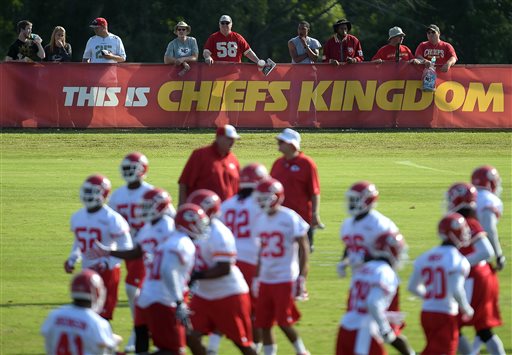 In this Aug. 14, 2014, file photo, Kansas City Chiefs fans watch NFL football practice on the Missouri Western State University campus in St. Joseph. Mo. By making fans feel as though theyre part of the team, and offering gifts and experiences exclusive to members, the Chiefs have managed to expand their season ticket sales at a time when many franchises are having a hard time filling their stadiums. (AP Photo/St. Joseph News-Press, Todd Weddle, File)

KANSAS CITY, Mo. (AP) — The change made by the Kansas City Chiefs a few years ago was subtle — one word, really — yet it ushered a pronounced change in the way the franchise viewed its most important fans.

Suddenly, the entire paradigm shifted. No longer were Chiefs fans merely customers, buying a ticket, attending a game and then heading home afterward. Rather they began to feel as though they were part of the franchise, just as integral to the success or failure of the team as quarterback Alex Smith, coach Andy Reid or even general manager John Dorsey.

And by offering those members exclusive gifts and experiences, the Chiefs have rebuilt their season-ticket rolls at a time when many franchises are having a hard time filling stadiums.

“Four or five years ago, we started a process of saying, ‘Let’s look at season tickets and really research what drives them. What drives behavior?'” Chiefs president Mark Donovan told The Associated Press. “‘What do they value versus what do we think they value?’ And one of the things we learned was feeling valued was a key driver. That’s been the impetus for our approach.”

The result? Free personalized jerseys for every season-ticket member, much to the chagrin of Donovan’s merchandising department. The establishment the “Kingdom Pass,” which not only serves as a game-day ticket but provides discounts on merchandise and concessions. And a system that allows members to accumulate points that are redeemable for memorabilia and events.

While the NFL does not disclose season-ticket information, a person familiar with the numbers who spoke on condition of anonymity told the AP that the average franchise sells about 45,000 in a given year. The Chiefs will surpass 60,000 season-ticket members this season.

“I can tell you we’re going to break records,” Donovan said. “Now, that’s a credit to our fans. But it’s a credit to all the other things. It’s creating value. It’s not only a great product on the field, but also making sure you deliver when they’re in the building.”

Other franchises are certainly taking note.

In the past couple of years, the Cowboys began conference calls with owner Jerry Jones and coach Jason Garrett exclusive to their members. Club and suite holders are granted access to the field after games, giving them a chance to toss footballs as if they’re Tony Romo.

The Vikings are contemplating similar programs during the construction of their new $1 billion stadium, set to open in 2016. Personal seat licenses are helping to defray the costs.

“We know we’re in a battle with HD-TV and your couch. The NFL is a great made-for-TV sport,” said Lester Bagley, the Vikings’ vice president of stadium development. “So what we’ve focused on, particularly in the design of the new stadium, is the fan experience. We want to incentivize people to come to the stadium, enjoy the pregame festivities and enjoy the game experience.”

The changing approach to season-ticket holders has trickled down to other pro leagues, many of which are also trying to combat sagging attendance caused by those 60-inch televisions.

The San Diego Padres have likewise adopted the idea, offering member picnics on the field at Petco Park, the opportunity to take batting practice and unique spring training experiences.

“The secondary ticket market has been a big driver of this,” said Brian Lafemina, the NFL’s senior vice president for club business development. “If you were selling entrance to 10 games, you were selling something you could buy on the secondary market, and you could pick only the games you wanted, and sit in the seats you wanted to. You didn’t need to be a season-ticket holder.

“Now, your ticket is a portal to your favorite team. That changes the dynamic.”

In Kansas City, the Chiefs are able to determine when fans arrive at parking tollgates, pass through the turnstiles and purchase concessions, all by logging swipes of their Kingdom Pass.

There are a couple of benefits to the “Big Brother” system.

First, the Chiefs can better connect to fans. If they know someone buys two hot dogs and a soda every game, they can have an employee waiting with the order at their seat when those fans arrive. It’s a small gesture but one that might convince them to renew the following season.

Second, the Chiefs are able to shape the entire game-day experience by incentivizing specific actions. If fans arrive early, for example, they can swipe their Kingdom Pass for bonus points. In turn, those early arrivals help to ease traffic congestions heading into the stadium.

“Season-ticket holders have always been the sort of lifeblood of our organization,” said Seth Rabinowitz, senior vice president of marketing for the Jets. “They create the home-field advantage for us. They propel the team. We’ve had a heightened understanding of that in recent years.”

In fact, the Jets modeled part of their season-ticket system after the Chiefs. But they are also taking incentives a step further by rewarding points for directly affecting the game, such as causing an opposing offense to commit a false penalty due to crowd noise.

“With any business, customers continue to raise their expectations for what they get in return for their patronage,” Rabinowitz said. “I think everybody is starting to address that.”

A Whopper of a Tax Problem

Wanted: A Million Bucks or More in Retirement Savings