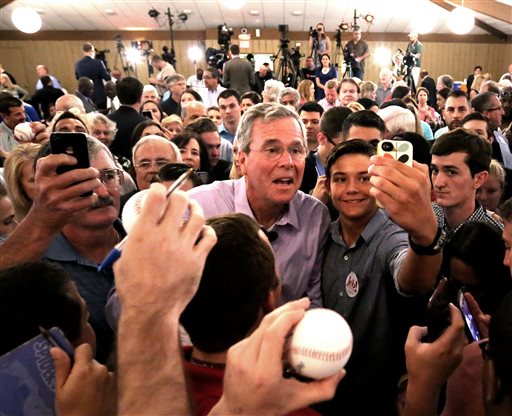 ORLANDO, Florida (AP) — Following his own advice, Jeb Bush is taking his presidential campaign to the neighborhoods and churches where Hispanics and African Americans live and worship in an effort to broaden his appeal among minority voters.

The former Florida governor was in the central part of the state earlier this week, speaking to a diverse group of 150 pastors and other religious leaders, repeating his oft-stated pledge to campaign in “every nook and cranny” of the country. On Friday, he’ll be one of only two Republican presidential candidates to address the National Urban League’s annual conference, joining Hillary Rodham Clinton and two other Democrats seeking the White House.

“Republicans need to campaign everywhere. Not just amongst Latinos, but amongst blacks. It’s okay to get outside your comfort zone. It’s okay that not everybody agrees with my views,” Bush said Monday at his event outside Orlando. “It’s not okay to not try. That’s the difference.”

It’s a lesson from Bush’s time running for office in Florida that he’s now applying to his race for president.

In his first run for governor in 1994, Bush campaigned as a self-described “head-banging conservative” who said he’d do “probably nothing” for African Americans, explaining he instead wanted “equality of opportunity” for all people. Bush lost that race, and then took a different tack four years later.

After traveling the state to meet with minority groups that typically align with Democrats, and touring hundreds of schools, he ran a winning campaign focused on schools and spoke often in black churches. William Andrews, executive director of Mercy Drive Ministries in Orlando, credits a statewide program Bush started once in office for helping him conquer his heroin and cocaine addiction.

“Mr. Bush sold me on becoming a Republican,” said Andrews, who is black.

Should Bush capture the GOP’s presidential nomination, repeating the campaign strategy he credits for his wins in Florida could be essential to his general election success in 2016.

Democrats are eager to hold onto their decisive advantage among such voters, and argue blacks and Hispanics will ultimately reject Bush because of his support for policies that include repealing Obama’s health care overhaul, opposing a federal minimum wage and his record of tax cuts in Florida.

“Bush’s failed policies of the past are no different than every other Republican in the field — he wants to divide families, hurt our economy, and let those like Jeb Bush, and only Jeb Bush, get ahead,” said Pablo Manriquez, the Democratic National Committee’s Hispanic media director.

For his part, Bush said this week his campaign does not have a Hispanic outreach strategy, because “outreach is a term that makes it sound like it’s on the periphery.”

“There is no outreach plan here, this is an integral part of my campaign,” said Bush, who is fluent in Spanish and whose wife, Columba, is a Mexican immigrant. “I have Hispanic children. I have Hispanic grandchildren. I’m part of the community.”

In late June, the same day NBC announced it was severing ties with billionaire real-estate mogul and GOP candidate Donald Trump, who described some Mexican immigrants in the country illegally as “rapists” and “criminals” during his campaign announcement, Bush met privately with a racially mixed group of pastors in grief-stricken Charleston, South Carolina.

Last week, Bush attended another meeting of about 40 pastors in Spartanburg, also split evenly between black and white ministers. Among those in attendance was the Rev. Windell Rodgers, a black Democrat from Greenville, who is supporting Bush in the state’s early voting Southern primary.

“He has a love for what I gather are all people, and is willing to go into their areas,” he said.

That includes Friday’s meeting of the Urban League, one of the nation’s oldest civil rights organizations.

“So many lives can come to nothing, or come to grief, when we ignore problems, or fail to meet our own responsibilities,” according to Bush’s prepared remarks. “And so many people could do so much better in life if we could come together and get even a few big things right in government.”

Bush and Ben Carson, a retired, African-American neurosurgeon, are the only two Republican candidates speaking at the event, where White House hopefuls are being asked to “share their visions for saving our cities.”

“We have to campaign all across this country with joy in our heart rather than anger,” Bush said Monday, “and go to places where Republicans haven’t been seen in a long, long while.”

Democrats Far Behind GOP in Raising Money for ’16 Super PACs