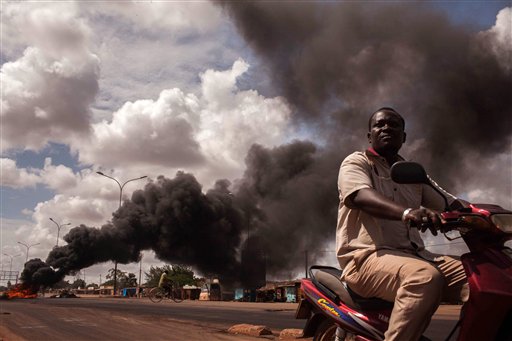 But at a press conference, Benin President Thomas Boni Yayi did not give any details on a potential deal, instead saying only that a “good decision” would be announced Sunday.

Earlier Saturday, anti-coup demonstrators burned tires at roadblocks in Burkina Faso’s capital and shouted slogans denouncing Gen. Gilbert Diendere, who was named leader of the country on Thursday after members of the elite Presidential Security Regiment stormed a government meeting and detained the acting president and prime minister. Though soldiers had used live rounds to repress earlier demonstrations, they had little presence in Ouagadougou on Saturday, emboldening demonstrators who cried out “Homeland or death!”

At least 10 people have been killed and more than 100 injured in the crackdown on anti-coup demonstrations in recent days, a worker at the Yalgado Ouedraogo Hospital in Ouagadougou said Saturday. The worker spoke on condition of anonymity because he was not authorized to speak to the press.

Gen. Pingrenoma Zagre, the army chief, issued a statement Saturday condemning all violence against civilians and urging soldiers to act “with professionalism.” He called on civilians to “trust the armed forces” as they worked to resolve the crisis.

The coup derailed a yearlong transition process that followed the fall of longtime President Blaise Compaore during a popular uprising last October. In addition to the Ouagadougou protests, unrest has also flared in other regions of the country, with angry crowds burning the homes of some Compaore supporters.

Elections were supposed to be held Oct. 11, but Diendere, a former top Compaore aide, has said that date is too soon.

The optimism voiced Saturday by Boni Yayi and Senegal President Macky Sall, who also participate in the talks, stood in stark contrast to their comments about the crisis less than 24 hours earlier.

Late Friday night, after a full day of meetings, Sall noted that the rival camps had shown little will to negotiate. Officials in the transition have insisted that the junta’s departure was non-negotiable.

The coup was swiftly condemned by former colonial power France, the United States, the United Nations and the African Union, which suspended Burkina Faso on Friday.