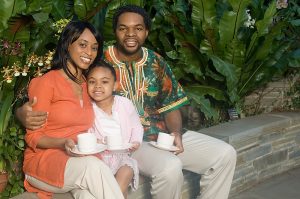 Despite the heavy debt burden, Blacks still managed to increase their level of spending at a faster pace than all other racial groups.

WASHINGTON (NNPA) –  Members of the Black middle class are more optimistic about their finances than they were a year ago, according to a recent study by the research arm of Prudential Financial Inc.,

Prudential surveyed more than 1100 Blacks on a wide range of financial topics in March. The survey participants ranged in ages between 25 and 70, with a household income of $25,000 or more with “some involvement in household financial decisions.” Fifty-one percent were married and 41 percent had 1-2 children. Thirty-five percent had some college experience, while 33 percent finished high school or less.

“The study shows increasing economic power and an emerging middle class within the community,” Charles Lowrey, Prudential’s chief operating officer, U.S. Businesses said in a press release. “Approximately 4 in 10 households surveyed have annual incomes of at least $75,000, and nearly a quarter earn $100,000 or more. Half of African Americans surveyed said they feel better off financially than a year ago, while only 19 percent say they feel worse.”

The study also reported that nearly two-thirds of Blacks surveyed “feel better off financially than their parents,” but economic optimism is often held in the eye of the beholder.

“How you feel about your situation doesn’t say much, except that you feel good about it,” said Steven Pitts, a labor economist at the University of California at Berkeley. “It has no value beyond that.”

Still, some economists point to the recovery of the housing market for the improved outlook, while others say that the positive financial outlook permeating the Black middle class has more to do with Black family living in the White House. As the Prudential study suggests, there are a number of factors that continue to contribute to the cautious optimism interwoven into the experience of Blacks in America.

“On one hand, we expect the best; on the other hand, we’re prepared for the worst,” said Julianne Malveaux, an economist and immediate past president of Bennett College for Women. “That’s how African Americans proceed with their finances; the better off you are the more likely you are to feel like everything is going to be okay, at the same time you know it may not be.”

James Clingman, author of the weekly syndicated newspaper column, Blackonomics, that focuses on economic empowerment in the Black community, said that the optimism expressed by the Black middle class was ironic given the dire financial straits of the Black community as a whole.

“I do see it as a paradox that we are the most optimistic group when it comes to the economy, yet we are doing the worst in the economy, collectively,” said James Clingman.

During the Great Recession, Blacks lost half of their collective wealth, largely due to the collapse of the housing market and the impact of predatory lending practices that plagued the Black community.

“The president is not going to provide any jobs to anyone,” said Clingman. “So it’s too much emotion and sensitivity on our part as Black people tied up in the fact that we have a Black president.”

The Prudential study reported that, “One-third of African Americans are financially supporting children under 18 or grandchildren, and 9% are supporting parents or grand­parents – both higher than the general population (25% and 4%, respectively).”

Paying off debts, having enough money to weather emergencies, and supporting children often dominated the list of financial priorities held by Blacks in the survey.

Malveaux said that juggling those priorities is often a unique experience for Blacks, and it’s not as common in the general population.

“Your children are in debt your mom doesn’t have the social security she needs so you’re basically being pulled between the past and the future that’s the juggling you have,” said Malveaux. “The Black middle class is being pulled in many different directions, so it’s unreasonable to compare them to similarly situated Whites.

These debt priorities have stifled the ability of Blacks to grow wealth for generations.

Despite the heavy debt burden, Blacks still managed to increase their level of spending at a faster pace than all other racial groups.

According to the Selig Center for Economic Growth at the University of Georgia, “African American buying power will increase 73 percent between 2000 and 2012, which not only overtakes the 60 percent increase in Caucasian buying power, but also the 67 percent rise in total buying power of all races combined.”

In 2012, Nielsen’s research and information company projected that African American buying power would reach $1.1 trillion by 2015.

Even though researchers tout Black buying power as significant evidence of improving economic opportunities and strength in Black community, some economists question the value of the emerging Black middle class and higher incomes without the solidarity needed to have real socioeconomic impacts.

“Individuals have money communities don’t,” said Pitts. “The capacity to use that money for some larger social good requires some sense of cohesiveness. It can come from the outside world, or it can come from some incredible sense of solidarity or some combination.”

Pitts said that harnessing “Black buying power” is more challenging than most studies of the phenomenon suggest.

“The question is how do you take the spending power of individuals and forge that into a collective hammer. The capacity to do that is not self-evident,” said Pitts. “My fear is always that the factoid is put out there in a way to try to provide an unnuanced [sic] way of going forward or a way of criticizing the communities for not doing better. I just think the world is more complicated.”

Not so complicated, is the fact that the money rarely stays in the community where it’s spent for very long.

Clingman said that it’s going to take collective compassion for the collective buying power to translate into economic progress in the Black community.

“We need more trust, respect, and love for one another. That sounds flowery and gushy, but that’s a very real issue among our people,” he said. “If we don’t have that, we’re not going to be willing to make the requisite sacrifices to move ourselves forward, collectively.”

Gannet to buy Belo for $1.5 billion