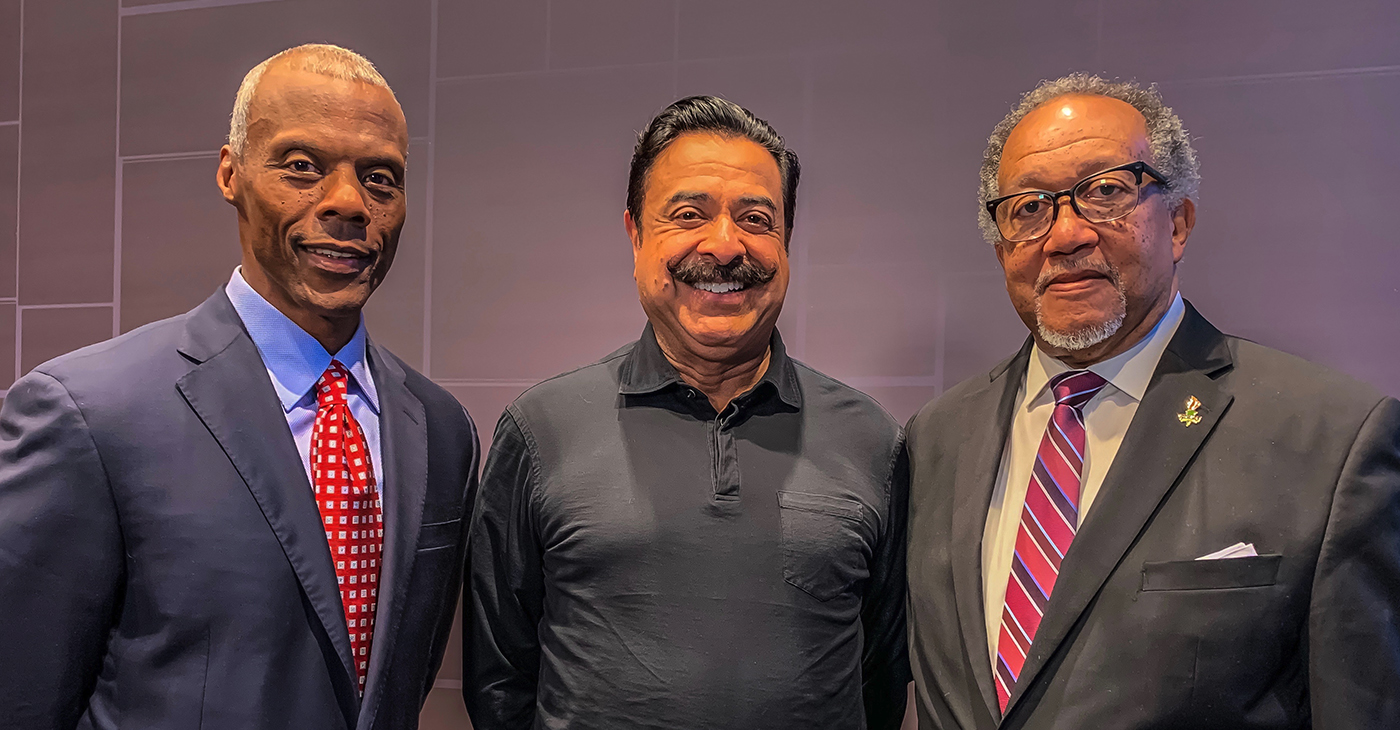 NNPA President and CEO Dr. Benjamin F. Chavis, Jr. (pictured at right), who participated in the teleconference, said the NNPA’s partnership with the BNC is a profound win-win for Black America. (Also pictured are Former Republican U.S. Congressman J.C. Watts, chairman of BNC (left) and Jacksonville Jaguars owner, Shad Khan, who is a primary investor in the new network (center).

In a joint teleconference broadcast live from the Four Season’s Hotel in New York’s Financial District, the Black News Channel (BNC) and the National Newspaper Publishers Association announced the official launch date and time for the nation’s first 24-hour, 7-days a week all-news TV channel that will focus on African American news.

The potential for the network appears almost limitless.

BNC will immediately have the potential to reach 33 million households daily in all the major media markets across the nation.

Combined with the millions of readers who consume information from NNPA’s Black-owned newspapers and media companies each week, the BNC could quickly become the top destination for all who want to consume African American news on TV and on mobile devices.

Tallahassee, Florida, houses BNC’s headquarters, and the network will have news bureaus around the country, including Washington, D.C. and New York City.

“This platform will create a venue for the African American community to have a dialogue to talk about news, education and cultural things,” stated Watts, who added that the network has been in the planning stage for many years.

“I had an afro when I started this,” Watts referenced.

“It’s especially important to have the Black Press of America join us in this venture. I bet most people don’t realize that there are 223 African American-owned newspapers in the NNPA, and that’s content for us,” Watts stated.

“We suffered a big blow with the loss of Ebony and Jet, publications I grew up reading. But I still read the Black Press in Oklahoma City, growing up.”

NNPA President and CEO Dr. Benjamin F. Chavis, Jr., who participated in the teleconference, said the NNPA’s partnership with the BNC is a profound win-win for Black America.

“This year marks the 192nd year of the Black Press of America.  Black Americans striving for excellence in all fields of endeavor give life to our culture that attracts and impacts all people. We set trends for ourselves and others,” Chavis stated.

“We’re not a cursed people, and we are a blessed people. We continue to strive for excellence, and to have Shad Khan announced as a primary investor for the launch and sustainable development of the BNC is of major significance,” Chavis noted.

Kahn told NNPA Newswire that the decision to back BNC was easy once he looked at the mission and the business model.

“I am a big believer in the fact that we have a number of communities, obviously especially the African American community, who are underserved,” stated Kahn, a magnate in the auto equipment industry.

In addition to the Jaguars, he owns the Fulham Football Club of the English Football League, All Elite Wrestling, and the Four Seasons Hotel Toronto.

“I hope that as time goes on, this becomes a bridge to connect all the cultures, including obviously south Asian. But I do believe there is an undeniable calling for everything the Black News Channel will deliver to African American television audiences, who have historically been underserved in an era where networks have otherwise successfully targeted news to specific demographic groups and interests. My decision to invest is an easy one because we get to answer that calling,” Kahn explained.

Both Watts and Kahn promised that BNC will give a voice to the varied experiences of African Americans and will not just tell a segment of the story but will tell the entire story.

“We will inform, educate, inspire, and empower the African American community,” Watts added.

The network will work with historically black colleges and universities to ensure that all African Americans have a voice.

A BNC correspondent will examine life on the HBCU campuses and explain why the experiences students have at these institutions of learning are so meaningful in the cultural development of many students’ lives. The weekly one-hour program will focus on what is happening at HBCUs that is good, positive, and uplifting.

Additionally, one of the many topics will include Sickle Cell Diseases, the blood disorder that disproportionately affects African Americans.

Veteran TV anchor Kelly Wright, who will host a 6 p.m. show on BNC, said his inaugural program would include a segment on the NNPA’s missing black girls national series.

That series spotlights the more than 424,000 African American women and girls who have gone missing in the United States over the past half-decade.