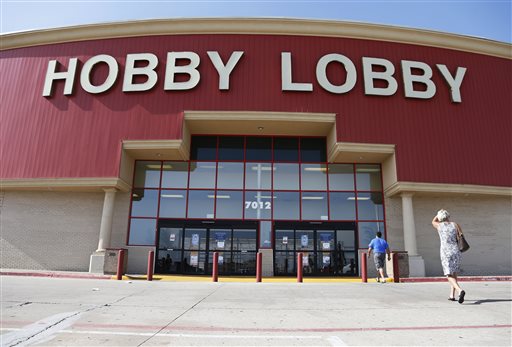 Customers walk to a Hobby Lobby store in Oklahoma City, Monday, June 30, 2014. The Supreme Court ruled Monday that employers can hold religious objections that allow them to opt out of the new health law requirement that they cover contraceptives for women. The Hobby Lobby chain of arts-and-crafts stores is by far the largest employer of any company that has gone to court to fight the birth control provision. (AP Photo/Sue Ogrocki)

(AP) – Republicans called it a win for religious freedom. The decision of the Supreme Court, they said, is further evidence the country’s new health care law is deeply flawed.

The claims of victory arrived almost immediately after the high court ruled Monday that some companies need not provide contraception to women as required by President Barack Obama’s signature domestic policy achievement. Yet there’s a risk for the GOP in crowing too loudly.

“The thought of your boss telling you what kind of birth control you can and can’t get is offensive and it certainly is motivating to women to vote,” said Cecile Richards, president of Planned Parenthood Action Fund, which plans to spend several million dollars this year to campaign for Senate candidates.

The Supreme Court ruled 5-4 that some companies can hold religious objections allowing them to opt out of health law’s birth control coverage requirement. While the ruling does not address the heart of the Affordable Care Act, it’s a setback for Democrats and amplifies a longstanding argument from conservatives that the law they call “Obamacare” intrudes on religious liberties as part of a larger government overreach.

“This is a clear and decisive defeat against Obamacare and a victory for the rights of all Americans,” Republican National Committee Chairman Reince Priebus said in a fundraising appeal distributed less than three hours after the Supreme Court ruling.

But Republican leaders such as Priebus were careful to avoid mentioning the impact on women and their reproductive rights, underscoring the delicate balance the GOP must strike as it works to improve its image among women. The party is still recovering from a series of insensitive comments made by GOP candidates in the 2012 election, including Missouri U.S. Senate candidate Todd Akin, whose campaign crumbled after he said women’s bodies were able to avoid pregnancy in cases of “legitimate rape.”

“Republicans have to be careful about not appearing as though they’re anti-contraception. This is a constitutional issue,” said Katie Packer Gage, a GOP strategist whose firm advises Republicans on navigating women’s issues. “We have to be very, very cautious as a party.”

Reinforcing its decision of Monday, the high court on Tuesday left in place lower court rulings in favor of businesses that object to covering all methods of government-approved contraception.

The justices’ action Tuesday was a strong indication that the earlier decision extending religious rights to closely held corporations applies broadly to the contraceptive coverage requirement in the new health care law, not just the four pregnancy prevention methods and devices that the court considered in its ruling. Tuesday’s orders apply to companies owned by Catholics who oppose all contraception. Their cases were awaiting action pending resolution of the Hobby Lobby case.

Lesson 6: The Pillar Of Courage