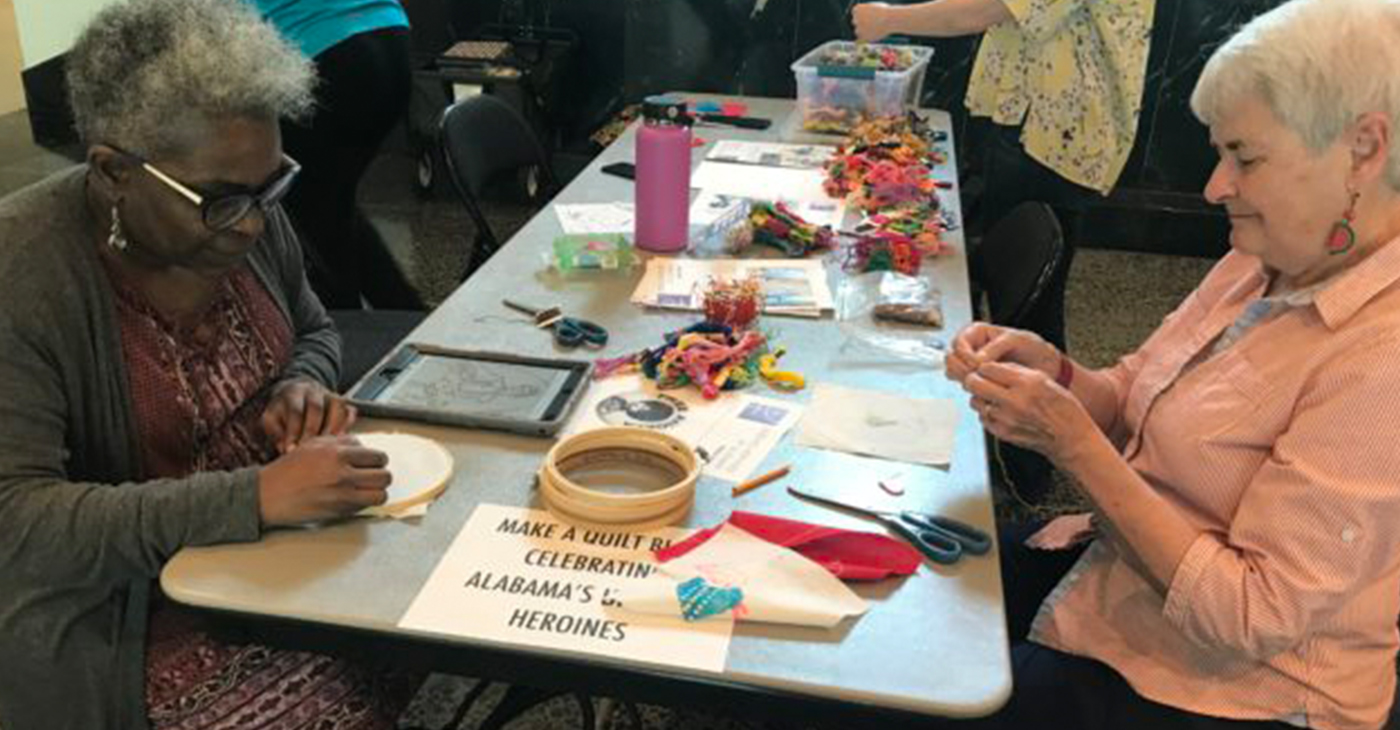 Every year since the celebration of the 50th anniversary of the Selma to Montgomery marches in 2015, members of the Bib and Tucker Sew-Op have selected a human-or civil-rights theme around which they design quilts and foster open discussion. This year commemorates Alabama’s bicentennial, and the group will spend the year recognizing the state’s unsung heroines through its March Quilts project.

“Bib and Tucker started the March Quilts five years ago … to celebrate the [Selma to Montgomery marches]. … We wanted to do it through our art form, which is quilting,” said sew-op cofounder Lillis Taylor.

The group has stitched quilts that shed light on various issues, including gender pay equity, the 50th anniversary of the Loving v. Virginia Supreme Court ruling, environmental justice, and others. So far, the group has sewn seven quilts from more than 850 submitted blocks, the components of quilt designs.

Bib & Tucker Sew-Op is a nonprofit organization that promotes sewing and quilting whose mission is to cultivate skills for those who like to sew and serve as a place where everyone can be both a student and a teacher.

Its sewing sessions are held at venues like the Birmingham Museum of Art (BMA), where participants are taught how to make quilt blocks on seven-inch pieces of fabric that are used in quilts put together by sew-op members. Each block serves a vehicle through which a person can express feelings about a particular theme—this year is a celebration of Alabama’s unsung heroines.

“For example, everyone knows Rosa Parks, but we’re trying to shed light on those people may not know were part of movements or did things to move the state forward,” Taylor said.

“Claudette Colvin, the 15-year-old who didn’t give up her seat, kind of sparked the movement of Rosa Parks not getting up and . . .  that led to the Montgomery Bus Boycott.”

On Sunday, April 28, a group of multigenerational, multiracial, multicultural Birminghamians gathered at the BMA to begin work on this year’s theme. Past sewing sessions have lasted three or four months, but because of the state’s bicentennial sewing sessions will last through October, Taylor said. Participants are paying homage to exceptional Alabama women—including Colvin, Zora Neale Hurston, Harper Lee, and many others—who have helped shape the state and the nation.

“She started the Tuggle Institute, which is now Tuggle Elementary School, but she was an educator for black children,” said Thomas. “When there was no one to educate black children and start a school for them, she decided to do that in Birmingham. The students were mostly orphans, but she gave them an opportunity to learn and to better themselves.”

Edwina Taylor plans to pay tribute to Parks and Colvin with a quilt block centered with a woman sitting on a bus: “I think it would be fun if I did a bus on a block with a little face on the bus,” she said.

The March Quilts project brings people together, Lillis Taylor said, pointing out that she and Bib and Tucker co-founder Annie Bryant come from different generations and different backgrounds.

“She is African-American, and I’m white, so the first year we did the project we really wanted to honor the fact that we could sit in a room and have this relationship,” Taylor said. “That was really the impetus for the project, celebrating the Civil Rights Movement, but we feel like sewing is a great vehicle for having conversations.

“We figure if we can get you to sit down and make quilt blocks, then we can start talking about things and finding out about our similarities, [which are more important] than our differences.”